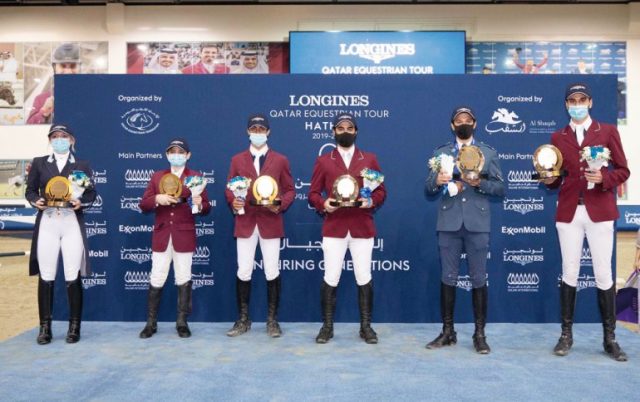 The Organising Committee of the Logines Hathab Qatar Equestrian Tour, consisting of the representatives from Qatar Equestrian Federation (QEF) and Al Shaqab, will meet this week to discuss the development of a strategic plan for the next season.
The third season of the  Championship concluded on Saturday with popular rider Hamad Nasser Al Qadi winning the overall Big Tour title at the QEF Indoor Arena.

The meeting will discuss a strategic plan which will be aimed at achieving further success during the fourth edition of the series, which will start in October.

The popular series was started three years ago under the guidance of H E Sheikh Joaan bin Hamad Al Thani, Chairman of the Qatar Olympic Committee, with the aim of promoting equestrian sport among Qatari riders and forming a wider base of trained horses and preparing local riders for international competitions,

The organising committee will work on setting up a competition calendar while requests  submitted by several friendly Federations to participate in some of the upcoming tournament rounds will also be taken into consideration.

“I also thank the official sponsors of the Longines Hathab series, ExxonMobil Qatar and Al Salam International for their generous support and added that without their contributions, the Tour would not have been successful. I hope, with their continuous support, the championship will grow into a more successful regional and international competition. After three seasons, the young riders have achieved a remarkable development in terms of performance,” Al Mannai said.

Ali Al Rumaihi, Tournament Director, said that although the tournament witnessed the absence of spectators due to the COVID-19 pandemic, the riders and their family members formed a presence that supported the riders throughout the last three rounds.
“The championship has benefited a lot from the main sponsors, Longines and Salam International two of the leading companies. The increased contribution of sponsors have played a big part in increasing the base of riders. We no longer rely on the Federation alone to bring in riders and horses. This championship differs from all previous tournaments, as it develops annually and is open to all Qatari and resident riders,” Al Rumaihi said.

Bader Al Darwish, Secretary-General of the Qatar and Asian Equestrian Federations and member of the Organising Committee, said that the championship has put Qatar in the international equestrian map and has been highlighted thanks to the facilities at Al Shaqab and the QEF Arena which played a huge role in increasing physical fitness of riders and horses.

“We organised the three decisive rounds within a very short period following the break due to the COVID-19 pandemic and managed to host very successful championship. All three rounds were held at the QEF Indoor Arena according to the precautionary measures with the support of Red Crescent volunteers and we were successful in achieving out goals,” Al Darwish said.