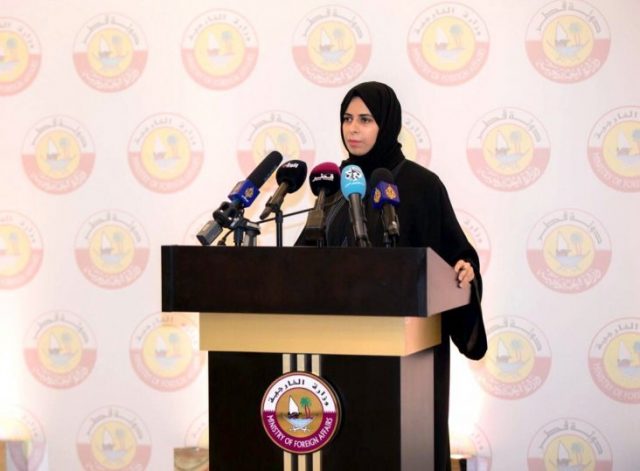 Qatar won’t join Gulf Arab neighbors in establishing diplomatic relations with Israel until its conflict with the Palestinians is resolved, the Qatari assistant foreign minister said.

Lolwah Alkhater also suggested in an interview Monday that there may soon be progress toward ending a three-year-old boycott of her country by regional states.

Alkhater spoke to Bloomberg a day before Israel and the United Arab Emirates are to sign the first treaty between a Gulf Arab nation and the majority-Jewish state. On Friday, Bahrain announced that it, too, would normalize relations with Israel, to the dismay of the Palestinians, who see the alliances with Israel as a betrayal of their statehood cause.

A common distrust of Iran has propelled the new alliances as regional constellations shift. For the past three years, Qatar has been the target of a diplomatic and commercial boycott by Saudi Arabia, the UAE, Bahrain and Egypt, in part over what they see as Qatar’s cozy relations with the Islamic Republic.

The rift has frustrated President Donald Trump’s efforts to form a united front against Iran in the Gulf, and a new round of U.S.-led mediation was launched two months ago.

The efforts, backed by Kuwait, haven’t yet reached a tipping point, Alkhater said.

“In the past couple of months, there have been messages and messengers going back and forth,” she said. “It’s very early to talk about a real breakthrough,” but “the coming few weeks might reveal something new,” she added, declining to elaborate.

Negotiations have moved beyond the 13 demands the boycotting states presented early on as a basis for any resolution, she said. These include shutting down Qatar’s state-funded Al-Jazeera TV, a frequent critic of other regional leaders and governments.

“We’re beyond this point,” Alkhater said. “The point we are at is engaging constructively in unconditional negotiations and discussions” that “do not necessarily need to include all parties at once.”

She declined to identify which of the boycotting countries Qatar is talking to. In the past, officials have said priority would be given to mending ties with Saudi Arabia, with which Qatar shares its only land border.

— With assistance by Greg Tanner