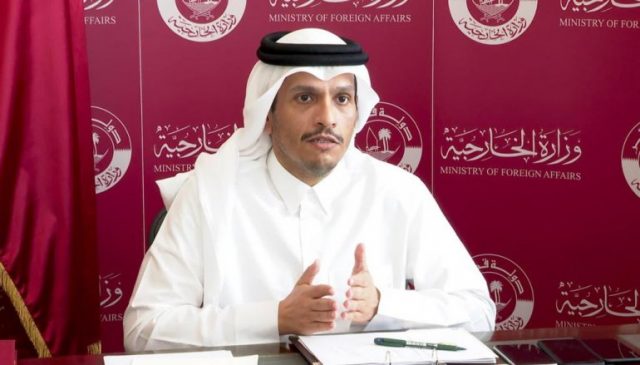 Doha: Deputy Prime Minister and Minister of Foreign Affairs H E Sheikh Mohammed bin Abdulrahman Al Thani has said that Qatar has good intention and good faith to engage with the blockading countries to resolve Gulf crisis for the stability of the region.

On Qatar-US relations, he said Qatar has strategic partnership with the US and the ties are developed on strong foundations. He said Qatar-US ties cover many fields like defence, security, economy, business, education, energy and other sectors.

To a question about policy of new US administration after elections, he said that US policy would not affect Gulf region rather it will affect the whole globe “and we hope to work with them after the transition”. “We will continue building on our strategic partnership which we have been building over the years. Our relations with the US will not be affected because we have built strong relations with all institutions of the United States,” he added.

“We have also seen very strong and significant moments by President Trump and his administration in order to reach a resolution of the crisis. Qatar has been very open since the beginning for a dialogue which is based on mutual respect, non-interference in each other’s affairs and respecting the sovereignty of each country,” he said.

He said Qatar has the desire to find a solution for a stable GCC region which is needed in turbulent times. “Whether it is under President Trump or President Biden, mainly the basis for any solution will be good intention and good faith of the countries which are the party (to the dispute). We have good intention and good faith for a constructive engagement with them to reach a fair resolution. We believe there is no winner out of this crisis. The only consequence of this crisis is more instability in our region,” he added. He said that Qatar didn’t conduct any hostile activity against the blockading countries.

To another question about the possible lifting of blockade before next year’s Global Security Forum session, H E the Deputy Prime Minister said, “We are hopeful this will end at any moment and what we need right now is a serious engagement in good faith with other countries. And this is what Qatar is prepared to do. At any time they will be ready for this, they will find Qatar ready for this. There is no winner out of this crisis; all of us are losing. When crisis will end all of us will be winners.”

He said, “We want the Qatar Airways to be able to fly over the airspace of Saudi Arabia and Bahrain before leaving the White House if the election results are in favour of Joe Biden.”

“We want to settle the Gulf dispute,” O’Brien said, adding that US President Donald Trump has made extensive contacts to resolve the crisis.

O’Brien also said that the unity of the Gulf and friendly relations between the countries of the Gulf Cooperation Council (GCC) are in the interest of the United States.

“It is in our interest for the GCC to come together. It is in America’s interest to have harmonious relationships within the GCC. It will bring in real economic opportunities across the Middle East,” he added.

“We felt that solving the air link issue, where Qatar Airways be able to fly over Saudi and Bahraini airspace is an important first step in solving that rift, I would like to see that done before, if we end up leaving the office, the next 70 days,” he told the forum.

On Iran issue, Qatar’s top diplomat said the region does not need a new arms race, and that more investment should be made in diplomatic solutions with Iran.

“We must invest more in diplomacy and diplomatic solutions with Iran and engage more constructively with them. We need more solid vision for the future of region’s security.”

He said Qatar is a neighbour to Iran and has common interest like the largest gas field in the world is shared between Qatar and Iran. “We want to encourage GCC countries to engage positively and constructively with Iran.

The Foreign Minister also stressed that Qatar may play any role in the framework of diplomacy, and that it wants to avoid any escalation in the region.

He said Udeid Air Base played important role in fight against ISIS. “We appreciate this relationship we have with US defence, US military. We want to remain as a factor of stability and not as a factor for instability in the region.”

Regarding Afghan peace talks being hosted by Doha, he said peace among the Afghans themselves is the next important step that Doha will push towards. He said the US is working closely with Doha to find a solution in Afghanistan. “We hope to see progress before the end of the year.”

“We do not believe in military solution. We believe in diplomacy in resolving all conflicts. There is war in Afghanistan for four decades and time has come to reach a diplomatic solution,” he said.

On Palestine issue, the Foreign Minister said the position of the State of Qatar is the need to discuss the roots of the issue in a way that guarantees the right of the Palestinians to establish an independent state.

He said that it is better to have a united front that takes into account the interest of the Palestinians and the two-state solution according to borders of 1967.

Established in 2018, the Global Security Forum is an annual international gathering bringing together a multi-disciplinary network of experts, practitioners, and policymakers from government, security, academia, media, entertainment, international organisations, the humanitarian sector, the private sewwctor and beyond to come together to discuss the world’s most pressing topics.

This global event provides a unique platform for international stakeholders to convene and offer solutions that address the international community’s leading security challenges.