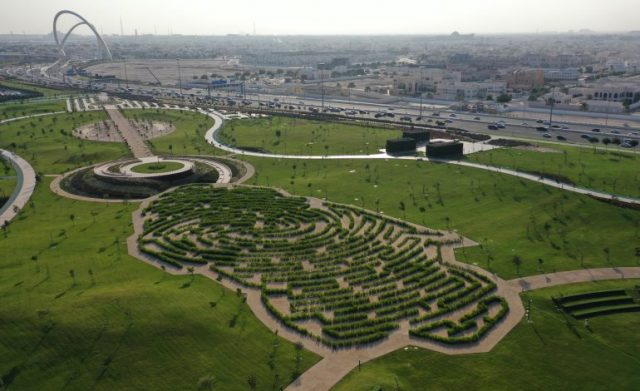 Qatar’s image is usually associated with the desert, camels, and nomad culture but Qatar has grown to offer more than that. Doha is home to many lush green areas, open spaces, and parks, that offer recreation and relaxation.

The 5/6 park taking shape in Onaiza boats of vast green spaces and will offer many facilities for everyone. To boost the local manufactures 65 percent of material used to build the park were sourced locally.

The popular public and family parks in Qatar now are quite different from the conventional parks with added features. The Ministry of Municipality and Environment makes sure that all the parks are perfectly manicured surrounded by flowering trees and boasting comfy walkways to enjoy or jogging tracks to burn calories on and bicycle lanes. The parks also feature high-end modern amenities with variety in children’s play areas.

The 5/6 park takes its name from the ‘5/6 arch’ monument. The park is located in Onaiza, Doha, in a very strategic location surrounded by the tourist hotspots such as Katara, Lusail, and also the West Bay beach.

Eng. Hessa Khamis Al Kaabi, Project Design Manager of the Supervisory Committee of Beautification of Roads and Public Places, stated that 5/6 Park contains lots of features distinct from other parks in Qatar, including a large plant maze. The maze designed shaping the map of Qatar is located in the heart of the park to be the focus of attention of every visitor. The maze’s entrances and exits were named after coastal cities of Qatar, and the final shape of the map appears clearly when viewed from the sky and the nearby hotels, adorned with fancy lighting to illuminate at night.

As for the hill next to the maze, it is about 5 metres high from the surface and located in the centre of park. Being higher than its surroundings, the hill gives overall 360-degree view of the park. 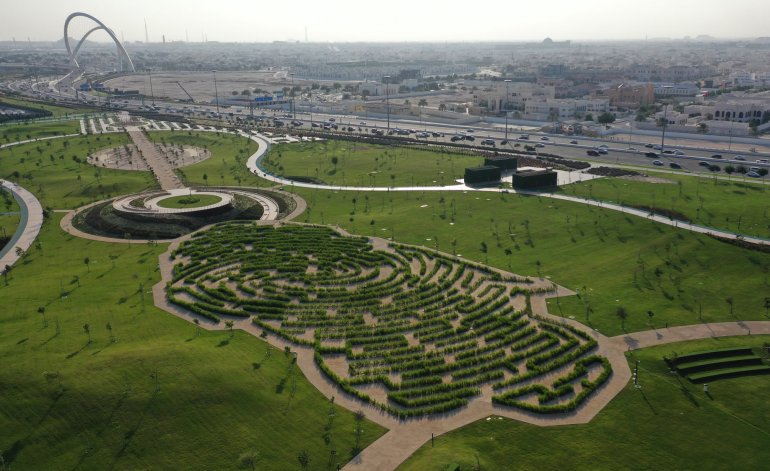 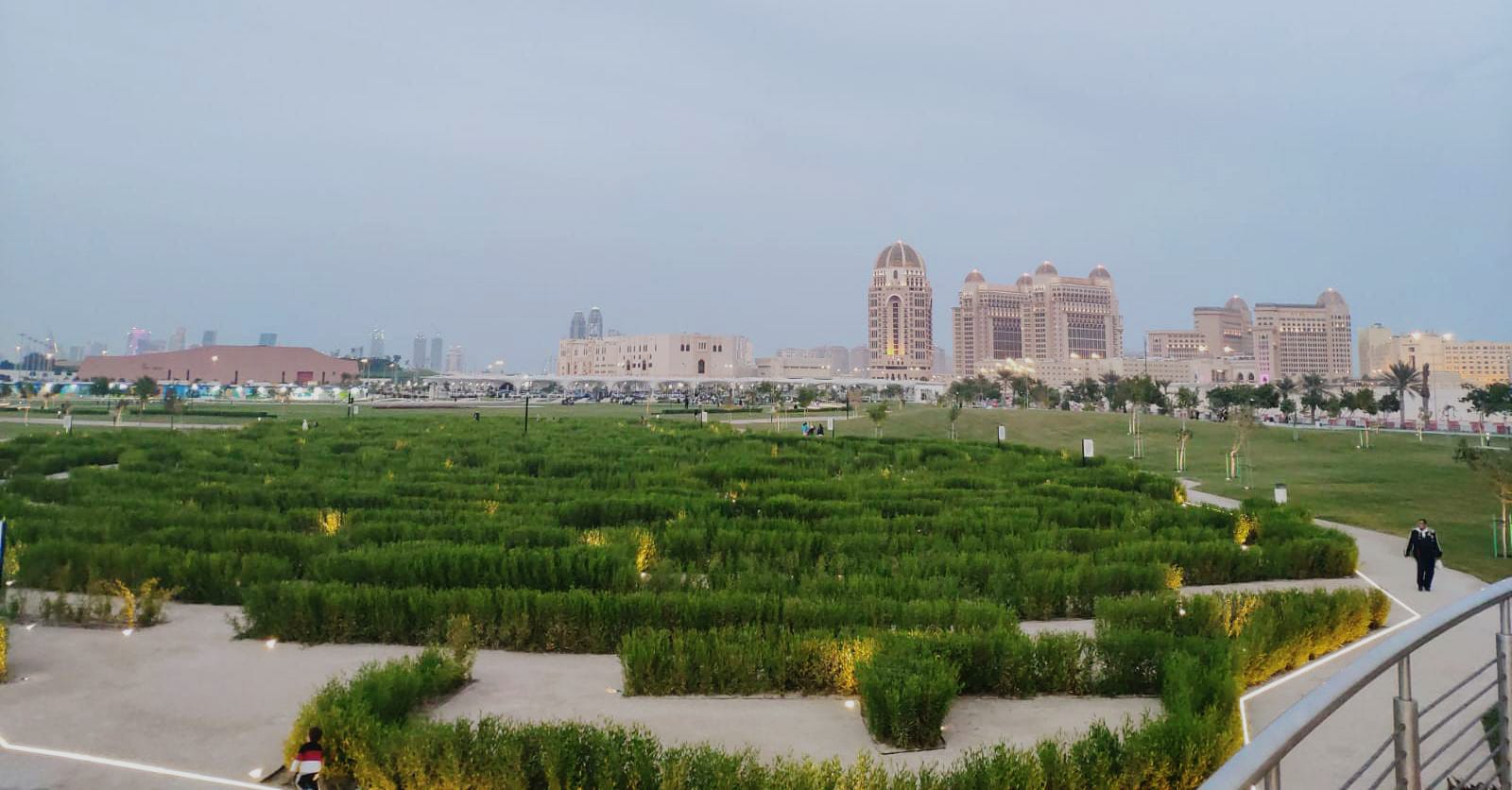 Among the distinct features of 5/6 Park is the ‘symbol of resilience’ (Sumood), designed by Mr. Faisal Al Hajri, a Qatari fine artist. Another artistic feature is a collection of two pieces from Mathhaf: Arab Museum of Modern Art, namely “Poems” (1963-1965) and “Poem in Three Verses” (1963-1965) by the Lebanese fine artist Saloua Raouda Choucair.
The park also includes many facilities attracting visitors and tourists, as it contains shaded areas for families to sit, play areas for children that contain games suitable for different ages, areas designated for celebrations and spaces to display various forms of artworks, in addition to areas specified for fitness equipment. 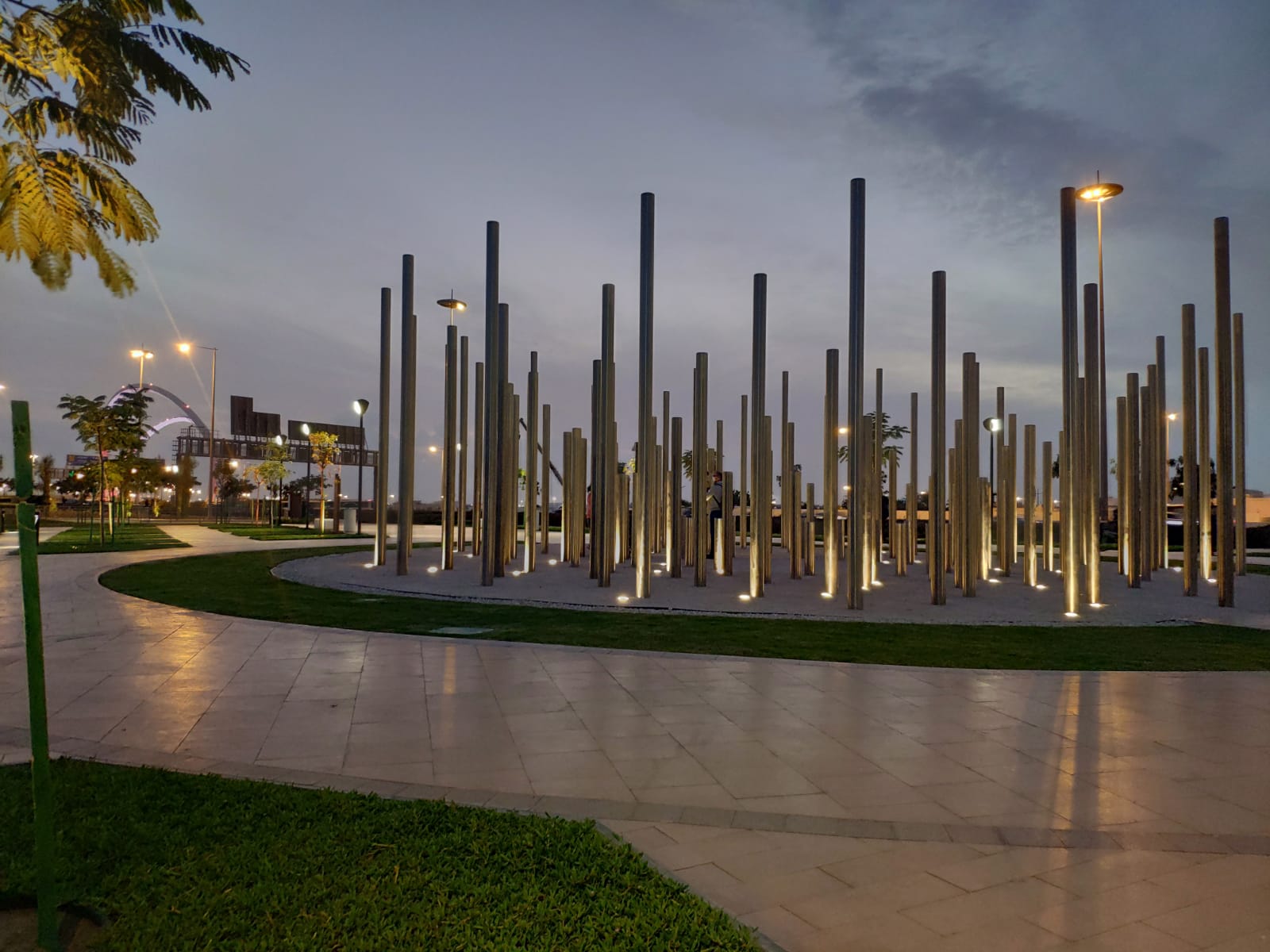 The park also includes exercise areas, pedestrian paths of approximately 1.4 km, jogging paths of 1.4 km and a cycle path of 1.1 km, in addition to bicycle parking slots. Stone and sand paths were implemented for pedestrians inside the park, which is the first of its kind in public parks, allowing visitors to the park can enjoy a healthy walking experience without shoes on several types of natural floors. 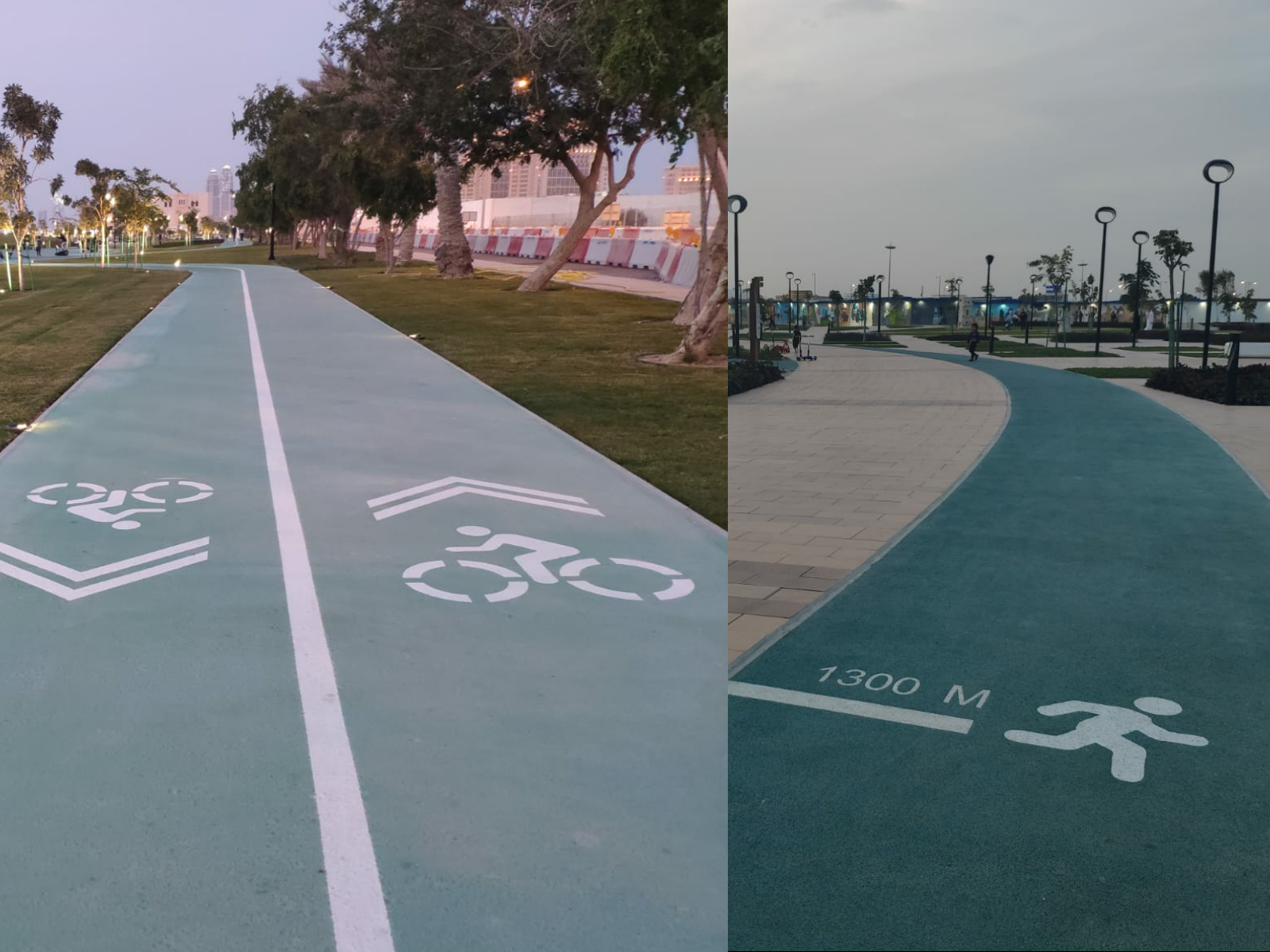 The park also includes many utilities and service kiosks such as restaurants, cafes, washrooms and prayer areas among others, in addition to providing seating areas and necessary services for visitors. This is in addition to the columns designated for feeding birds and distributed throughout the park. 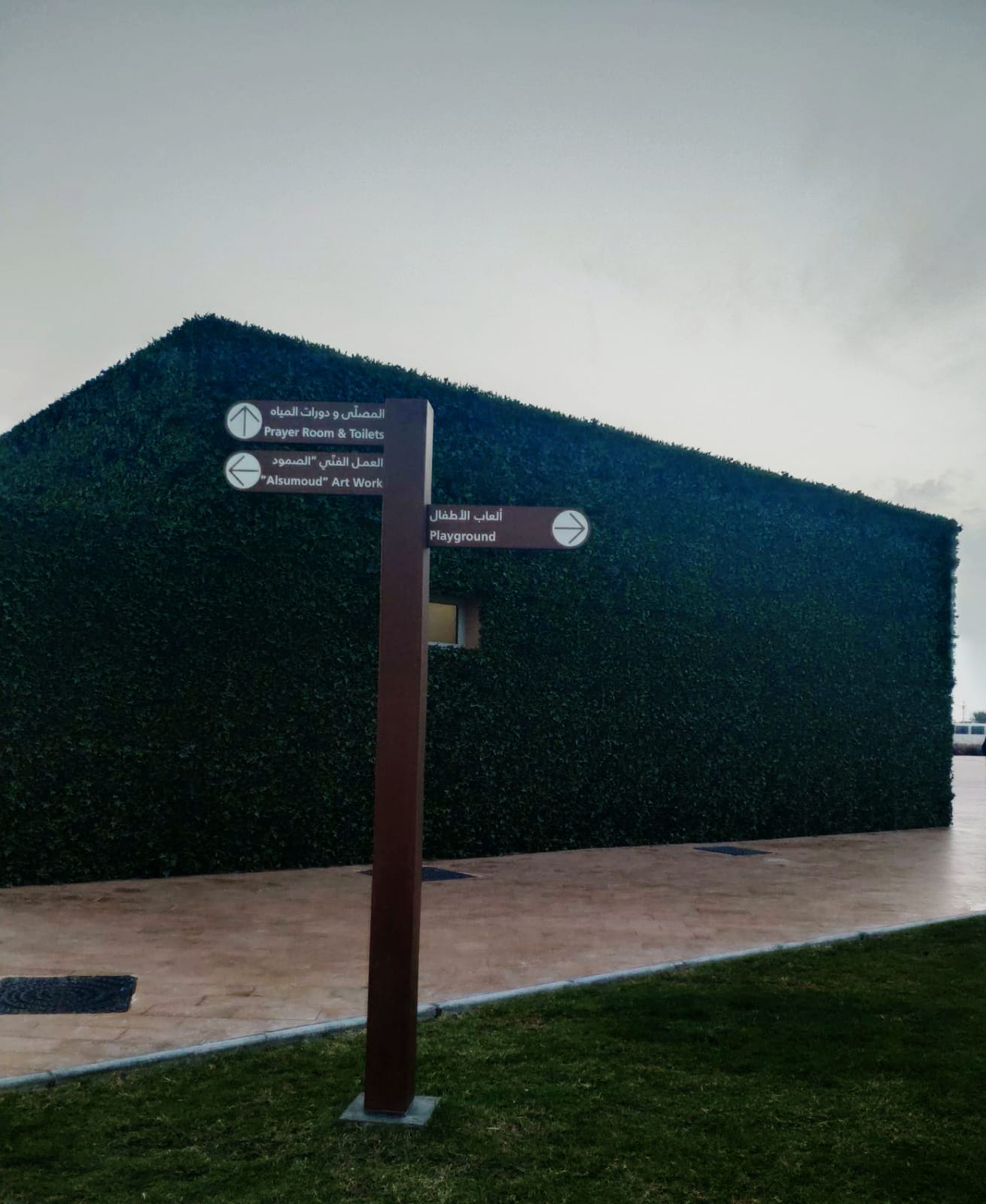 Eng. Hessa also added that the park contains open green areas of about 122,000 square metres. It also includes lots of small shrubs and tree fences. It may be noted that 10% of the trees planted in the park are of Qatari origin such as Ziziphus Spina Christi, Acacia Tortilis and Acacia Arabica. These trees provide a cool shaded atmosphere and outshine Qatari identity.

As part of the Supervisory Committee’s focus on implementing beautification and recreational projects that preserve the environment and contribute in improved healthy life for the people, the trees for plantation in the park were chosen in consideration of the nature of Qatari environment, taking into account of less water consumption and future maintenance works.

The trees chosen include the Ziziphus Spina Christi, Acacia Tortilis and Acacia Arabica, which are evergreen trees with a height of more than 10 metres, and grow excellently in Qatar and withstand environmental conditions from high temperature and drought.

Among other trees chosen are the Cassia Nodosa, Delonix Regia, Tabebuia Argentea and Cassia Gluca They are beautiful and attractive shade trees with a height of 10 metres, and are distinguished for growing well and resisting drought. Also among the shade trees included in 5/6 park are the Bucida Buceras, Millingtonia and ficus benghalensis which are among the evergreen trees ranging between 6 to 10 metres and are considered one of the greatest and wonderful shade trees in public parks. In addition, Ficus religiosa is chosen and reaches up to 30 metres in height and suitable for the Qatari environment as they bear most types of soil and are used in the park individually.

The park also includes decorative trees planted alone or in groups, or as backgrounds behind young shrubs and flowers such as Cassia Javancia and Bauhinia Purpurea.

Using Local Materials in the Project

It is worth noting that, as the Supervisory Committee of Beautification of Roads and Public Places in Qatar endeavors to support local manufacturers; the committee has depended on locally produced materials in implementing this park up to 65% of materials used. The local elements used included Curbstone tiles, asphalt and lightings, in addition to planting materials of trees, grass, different plants and Sweet Soils, and locally-made rubber floors known as SBR were used as a recycled rubber layer for the jogging tracks. 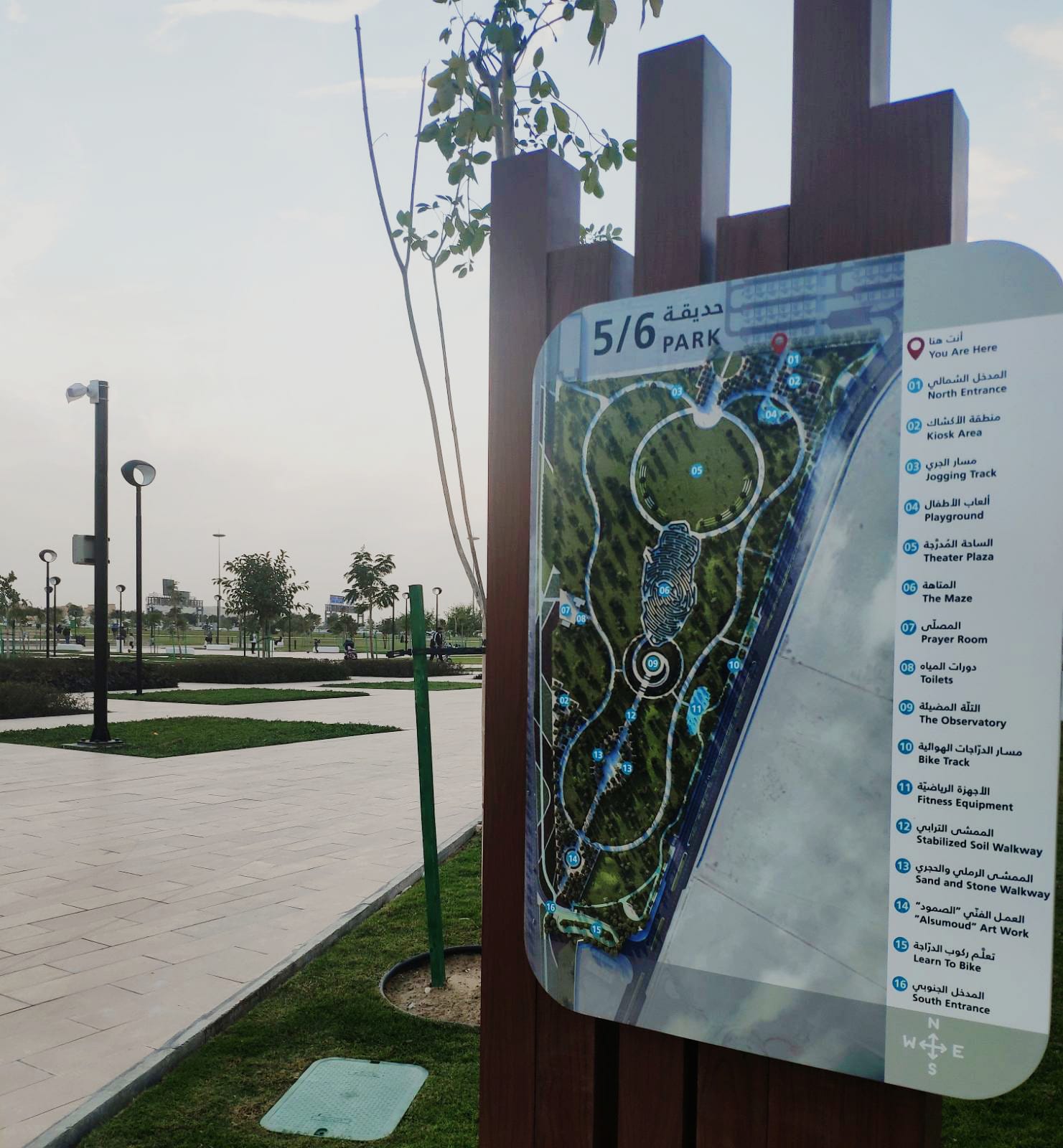 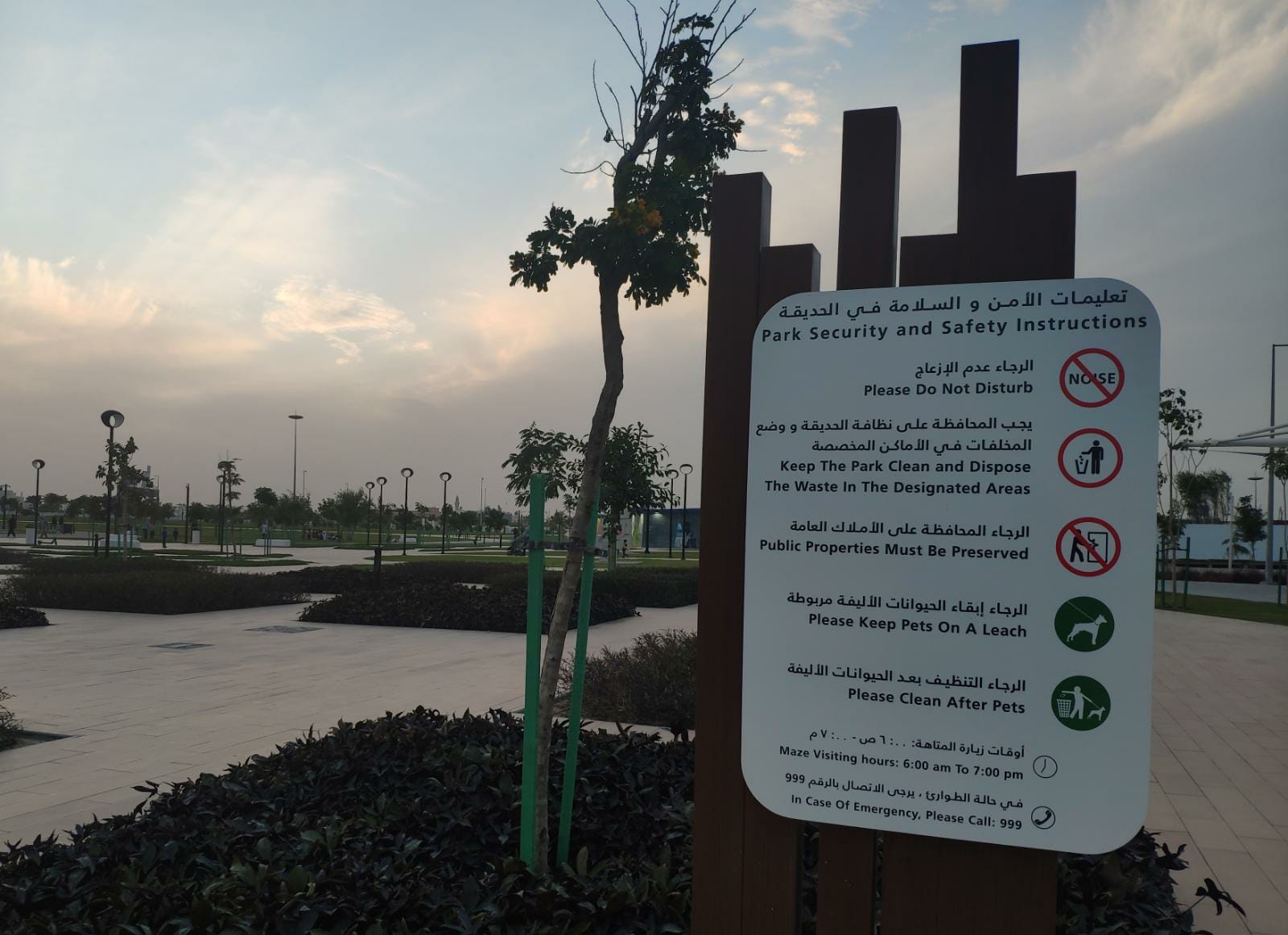 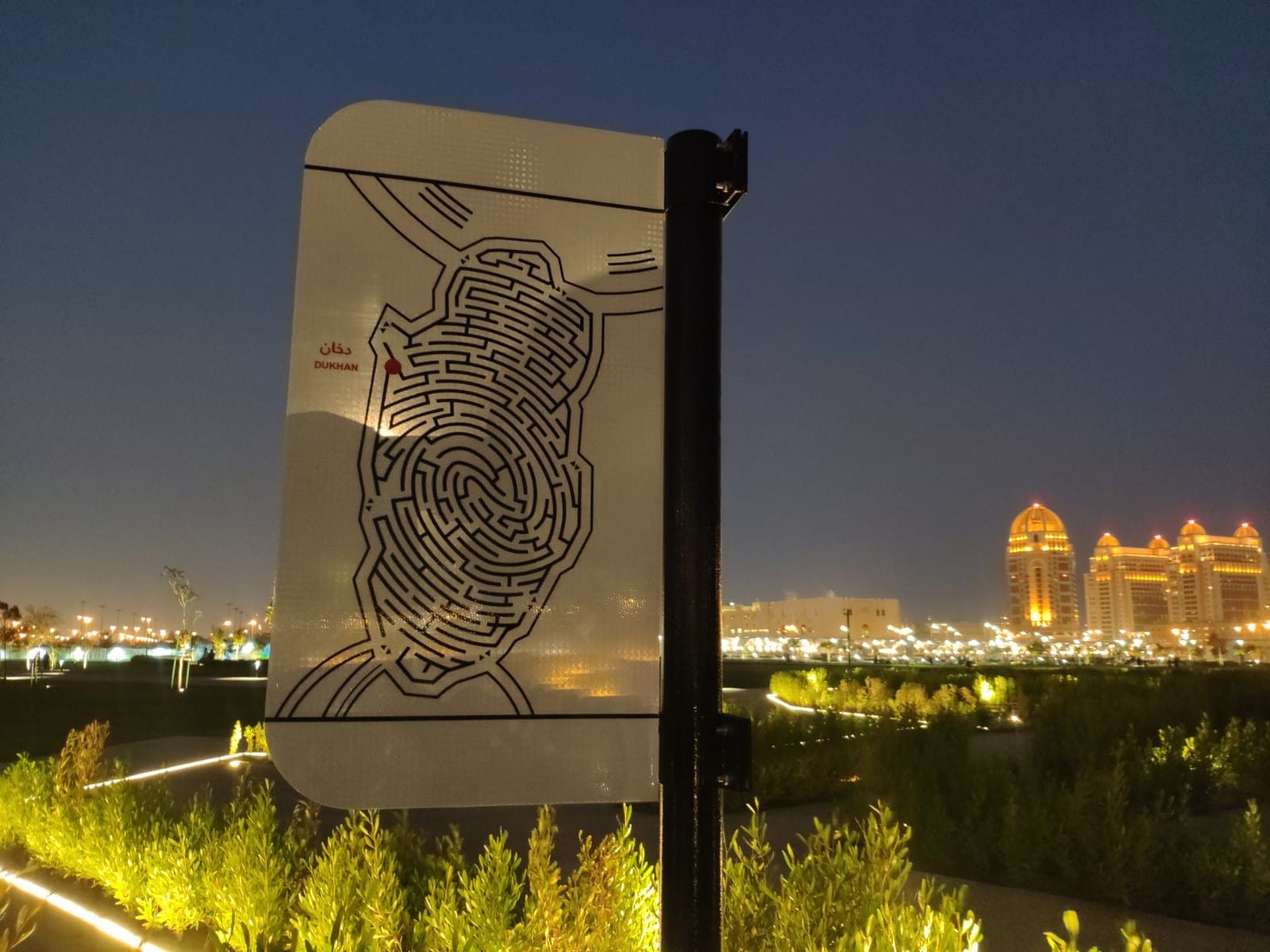 Ample parking space is available and for the best convenience, Al Qassar Metro station (Red line) is just at walking distance from the park. The park opens at 6:00 am and as mentioned in the park guideline, the green maze can be enjoyed until 7:00 pm.

The park is very entertaining for both children and adults. We highly recommend visiting this amazing park.

The park’s guidelines are clearly stated in signage scattered throughout the park. It includes: