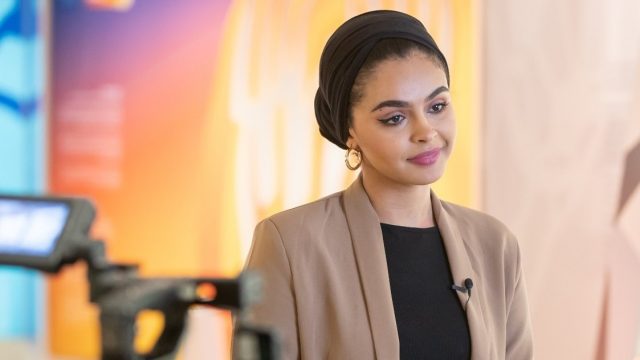 When Alaa ElObaid was asked to become the Sudanese community representative for the FIFA World Cup Qatar 2022™, she grasped the opportunity with both hands.

Born and raised in Qatar, ElObaid has been passionate about giving back to the community ever since her schooldays. After attaining her linguistics and mass communication degree from Qatar University, she began working in the community development sphere with Qatar Foundation.

During her spare time, ElObaid acts as a link between Qatar’s Sudanese community and the Supreme Committee for Delivery & Legacy – the organisation responsible for delivering the infrastructure and legacy projects for Qatar 2022 – through its Community Partnership Programme. It’s a role ElObaid is proud to commit to.

“I wanted to show Sudan and Sudanese culture in its truest from through the Community Partnerships Programme. It was a once-in-a-lifetime opportunity to become a part of such a big event like the World Cup,” said ElObaid.

Launched in 2015, the Community Partnership Programme connects with the country’s diverse communities to inform and engage them with preparations for Qatar 2022. In her role, El Obaid said she is proud to share Sudanese culture with the world.

“Our culture is very rich and diverse. What’s beautiful about Sudan is that if you travel west, you’ll find people that speak a completely different language to that spoken in the city and other parts of the country,” said ElObaid.

“Sudanese youth are incredibly talented and this has been the perfect platform to show that. It has also been a gateway to connect young people who were born outside of Sudan to their culture, and a way to create a sense of home for the older generations who have lived abroad for years. In a way, this opportunity gives back to us just as much as we give to it,” she added.

Through volunteering, cultural booths, dance and musical performances, the community has participated in various events, including the 2019 CAF Super Cup, the Amir Cup, and both editions of the FIFA Club World Cup™. Notable performances have included a live art show by locally renowned graffiti artist Assil Diab and a musical performance by singer Azhar Sied-Ahmed, also known as Zoozita.

The cultural performances were met with positive responses, with ElObaid’s favourite coming during the 2020 Amir Cup – at the inauguration of Ahmad Bin Ali Stadium.

She said: “Even though many of the people in the crowd were not Sudanese and they did not understand the lyrics, people were singing along and dancing. It goes to show how music, in the same way as football, transcends language barriers and can connect people in a beautiful way. That was one of the things that encouraged us to become part of future events.”

Qatar is home to more than 60,000 people with Sudanese heritage. This month, the Sudan national team will participate in the FIFA Arab Cup™ qualifiers in a match against Libya. ElObaid said the community is excited to watch the games.

“Sudanese people are very excited to finally see their team represented in a major sporting event such as the Arab Cup. It’s a brilliant opportunity for the teams and fans to show their presence on the footballing stage,” said ElObaid.

“Football is very popular in Sudan. If you go to Sudan, you’ll find children and adults playing football in almost every neighbourhood. It is a huge part of our culture and daily life,” she added.

In just 17 months, Qatar will host the first FIFA World Cup™ in the Middle East and Arab world. ElObaid anticipates more members of the community will become a part of the tournament. To her, the tournament is not only a sporting event, but also a festival and celebration of culture.

ElObaid said: “Whether the Sudan national team qualifies for the World Cup or not, the community will still participate as spectators, volunteers and performers. You will always find Sudanese people at the forefront of the stands, cheering passionately.”