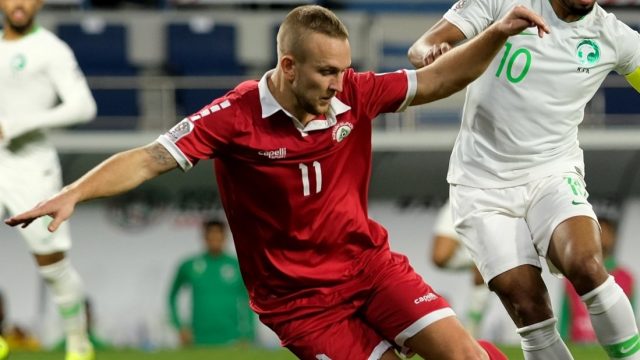 Every footballer dreams of playing at the FIFA World Cup™ – and for players with links to the Middle East and Arab world, the next edition of the tournament provides particular motivation. Robert Alexander Michel Melki is one such player. The defender is fully focused on making his dream a reality by appearing at Qatar 2022 with Lebanon.

Melki, who was born in Sweden to a Swedish mother and Lebanese father, has developed a unique perspective on Qatar 2022 thanks to playing his club football in the Gulf nation. After starting his career in Sweden, the 28-year-old joined Qatar Stars League side Al Khor in 2019 before moving to Al Shahania in Qatar’s second division earlier this year. During his spell in Qatar, Melki has observed significant developments in the country.

“The stadiums are really cool – all of them. They are all unique in their own way. I’ve played in some of the new stadiums and it’s really something else,” Melki told qatar2022.qa. “Almost all of the stadiums are done now – there’s been so much progress over the last couple of years.”

One venue Melki is keen on visiting is the 80,000-capacity Lusail Stadium. Set to be completed soon, Lusail will host matches during every stage of the tournament, including the final on 18 December 2022. “I haven’t seen it from the inside, but I think Lusail Stadium looks amazing,” Melki said. “The whole stadium complex looks really nice.”

The defender’s time in Qatar has also given him an understanding of the compact nature of the country. With everything situated in close proximity, Melki believes fans and players alike will make the most of this unique World Cup experience. The longest distance between stadiums is just 75km by road – meaning everyone will be in the thick of the action throughout the tournament.

“For fans, it’s going to mean that you can almost see all the games in the tournament because everybody is going to be in the same place,” he said. “It’s going to be a big celebration, as it’s not going to be spread out. It’s something we have never seen before at a World Cup.”

Melki, who played for Sweden’s U21 side before switching his allegiance to Lebanon, continued: “The teams will have their training base and be able to travel to all the stadiums within about half an hour. They will be able to focus purely on football without having to worry about travelling, which will make it more relaxing.”

Melki is hoping to experience Qatar 2022 as a player. To achieve that, the defender will need to lead Lebanon through the current stage of World Cup qualifying. Drawn in a group containing the Korea Republic, Sri Lanka and Turkmenistan, the Cedars need to finish in the top two in order to have a chance of making it to the third group stage.

“We have a chance to go through, so if we get to the next round, anything can happen,” Melki said. “We are a good team and have improved over the last five years. We have our games in June [in Korea Republic], so if we succeed there, we will see how we do in the next round.”

Lebanon’s tournament aspirations also include the FIFA Arab Cup™, which will be staged in Qatar later this year. On 23 June, in Doha, Lebanon will play Djibouti in a one-off play-off for a spot in Group D alongside African powerhouses Algeria and Egypt, plus the winner of Libya versus Sudan.

Melki, who represented Lebanon at the 2019 AFC Asian Cup, hopes a win over Djibouti will provide the opportunity for Lebanese football fans to see their national team live in Qatar in December.

“We have a lot of Lebanese people here in Qatar, so if this pandemic goes away by then, it will mean a lot to us to see them in the stands,” he said. “They have a big passion for us and we saw that during the Asian Cup two years ago in the UAE. The support we got from the Lebanese fans was amazing and I hope we will experience that again here in Qatar.”