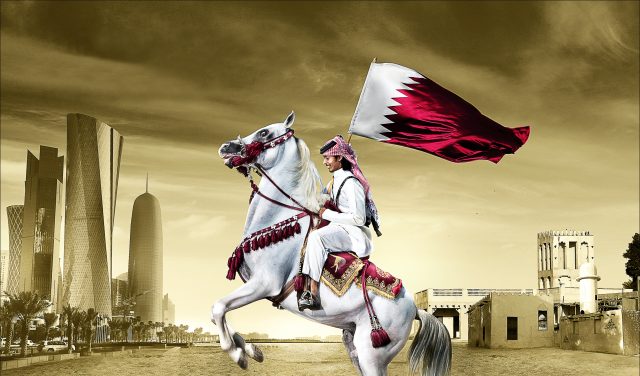 A Cultural and Historical Heritage

When studying the Qatari flag, any researcher is bound to discover a fascinating history. In an effort to better understand this history; a historical study was conducted to document the origin of the flag color from past to present.

The Color of the Flag

The origins of the flag and its development

To understand how the Qatari flag is tied to the country’s history, scholars need to first examine several pieces of evidence that would help them investigate the profound history of this flag.

The meaning of the word “Aladaam”

Since ancient times, the word “Aladaam”, for Qataris, has signified the deep, dark red color on the standard of the founder of Qatar, Sheikh Jasim Bin Mohammed Bin Thani, rest his soul. The linguistic origins of the word tie it to the verb “to support”, as in to support or prop up something. Another related word is “posts”, which can prop up a house. The word “Aladaam” has also been used to refer to someone who goes forward confidently, without looking back or paying attention to an opponent. The “Adaam” are the central pillars of a house, which support the structure, and it can also refer to a support for the roof. The flag post was one of the pillars under which people would congregate, or the place where troops would amass.

The flag of the Hudna (ceasefire)

In January of 1820, after the British campaign against Ras al-Khaima, a peace agreement was signed between the British East India Company and the emirates of the Trucial Coast: Abu Dhabi, Dubai, Sharjah, Ajman, Umm al-Quwain, and Ras al-Khaimah. The following month, Bahrain joined the signatories of the agreement, and outlined its conditions for peace between the British and the emirates of the Trucial Coast. The agreement provided for the use of a general flag which all Arabs of the Trucial States would use, after being united through the treaty, and this flag would become known as the “Hudna” flag. It was comprised of a white cloth with a red stripe that ran through the middle of it. Although each of the Trucial States became a British protectorate in the late nineteenth century, the British government did not obligate these states to fly the Hudna flag.

In 1851, the people of Qatar were the target of an invasion from Mesaimeer, and when they congregated and went out to confront the invaders, each tribe would use its own rallying cries and fly its own banner. Sheikh Mohammed Bin Thani realized the dangerous predicament the Qataris were in. This religious scholar and eloquent speaker, who believed in the history and culture of his homeland, knew how critical it was to unite the Qataris under one banner.

In 1971, after the British protectorate was abolished, Qatar joined the United Nations. The Qatari flag, with its historic white and maroon colors, was flown at UN headquarters.

“The law shall define the motto and the flag of the state, its decorations, badges, and its national anthem.”