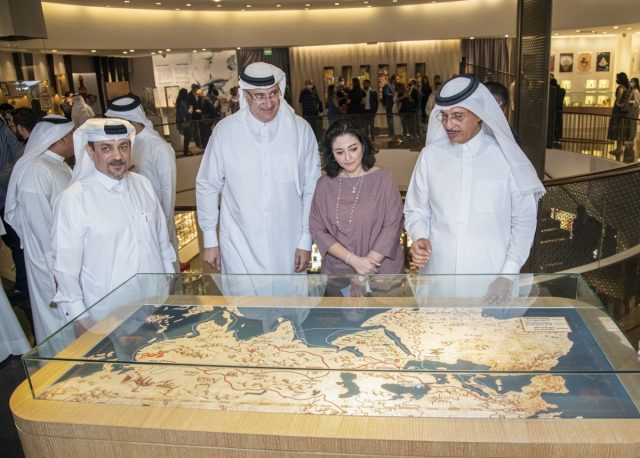 Doha: The Perfume Museum By Reem Abu Issa— the first of its kind in the region — opened at The Pearl Qatar on October 28, including thousands of one-of-a-kind collections dating back from 1800 to the 1900s.

The opening ceremony was attended by Vice-Chairperson of Qatar Galleries Authority, Sheik Hassan Al Thani; CEO of Qatar Museums, Ahmad Al Namla; Chairman of Abu Issa Holding, Ashraf Abu Issa and Issa Abu Issa. Nestled by the sea in the heart of The Pearl-Qatar, The Perfume Museum by Reem Abu Issa is a unique and alluring trip back in time to resurrect an ancient and mystical luxury object. The Perfume Museum is over a two-decade-long dream of Reem Abu Issa.

A personal creative expression and an ever-growing passion for artistry. The museum showcases valuable, rare, and historically important perfumes of the past decades, when rising perfume makers collaborated with talented glass makers and fashion designers in order to create the most intriguing perfume bottles as objects of luxury, creativity and art.

“This is basically a historical center of commercial perfume bottles. We attempt to grant individuals a journey around (aroma) fixings and how the Middle easterner World contributed to the improvement of perfumery,” museum owner, Reem Abu Issa said on the sidelines of the occasion. Some of the collections include 1960 Rolex and 1926 Rolls Royce-inspired perfume bottles, as well as a miniature 1952 Rue dela Paix lamp post and several other French-inspired designs.

She said The Perfume Museum, which shows rare and historical critical fragrances of the past decades, resulted in a collaboration between skilled glass makers and design architects to make the foremost charming aroma bottles as objects of extravagance, imagination and art.

The Museum gives guests an opportunity to walk down a memory path of fragrances and scent along the Silk Road – a network of trade routes connecting Asia and Europe with the Middle East as the crux. They can moreover learn the method of perfume-making: from crude fixings to extraction, refining, detailing, industrialization and bottling. Following the artistic perfume bottles, a unique collection of early cosmetics from Kohls, face powders, compacts, and lipsticks are also on show.

“It’s more of an interactive museum and then you got some collections and unique pieces from R Lalique and Baccarat,” Reem said, adding that many of the collection are French perfumes.

“Since my family has always been in the perfume business, we were one of the first people to bring commercial perfume bottles to Qatar. As a child, I used to collect miniatures and then I decided to collect bottles instead 20 years ago, and I thought I would share it with people,” she recounted,” Reem said.