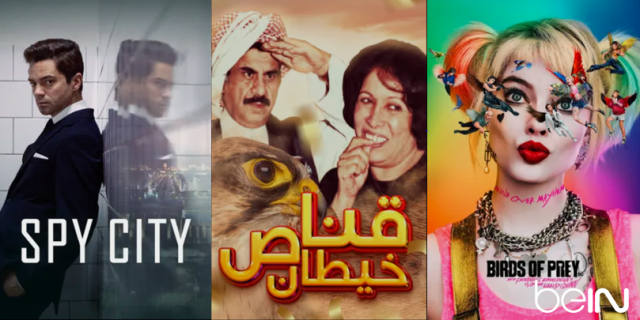 Doha – 28 April 2022: On the occasion of Eid Al-Fitr, beIN MEDIA GROUP (“beIN”), the global sports and entertainment broadcaster, is inviting subscribers across the Middle East and North Africa (MENA) to enjoy its curation of diverse, dramatic, light-hearted, and action-packed entertainment content – with amazing entertainment programming suitable for every member of the family. All the below programming follows MECCA timing.

Kick-off the holidays with beIN DRAMA 1’s introduction of enthralling Arabic plays, shown daily from May 2-5 at 12:00 – dive into the modern re-telling of the famed comedic play, Azoubi Essalmiya; the tragic story of Ala Haman Ya Fr3on, in which the protagonist faces insurmountable struggles in his professional and personal life; the satirical Bye Bye London, following a Kuwaiti businessman’s eccentric adventures in London; and the social comedy, Ganas Khytan, which explores the lives of locals and expatriates in Kuwait’s region of Khaitan.

DC-universe comic enthusiasts are in for a treat this Eid with beIN MOVIES 2’s DC Comics Week, every day from May 1-7 at 22:00. Begin your week of adventure with Batman & Robin, then tune in every following evening with Batman v Superman: Dawn of Justice, the Suicide Squad, Justice League, Ryan Reynold’s rendition of Green Lantern, Birds of Prey, and end the extravaganza on the classic 1984 Wonder Woman. And if that was not enough, you can catch the new The Suicide Squad movie this May 6 on beIN MOVIES 1 at 21:00.

Looking for something a little more high-stakes-action? Thrill-seekers can get themselves hooked on Spy City, a new show starting this May 2 on beIN SERIES 2 at 20:00. The show follows the life of Fielding Scott, an MI6 spy, as he dashes through Cold War Berlin to clear his name, put an end to secrets being shared with enemies, and unravel the agendas of people in power.

For the little ones, beIN also has amazing children’s content lined-up on its three kids’ channels, with Baraem airing Daniel Tiger (every afternoon in May, 15:30), featuring Daniel, a shy but brave four-year-old tiger who lives in the Neighbourhood of Make Believe; Aqbal Al E’eed a two-hour live competition show on Jeem TV (three days of Eid, 14:00); in addition to an array of others on CBeebies, including Bluey, JoJo & Gran Gran, Swashbuckle, and Grace’s Amazing Machines 2 at various times.

For all entertainment offerings on beIN for Eid Al-Fitr, please visit https://www.bein.com/en/bein-choices/

ALL THE SHOWS ARE AVAILABLE TO STREAM ON TOD