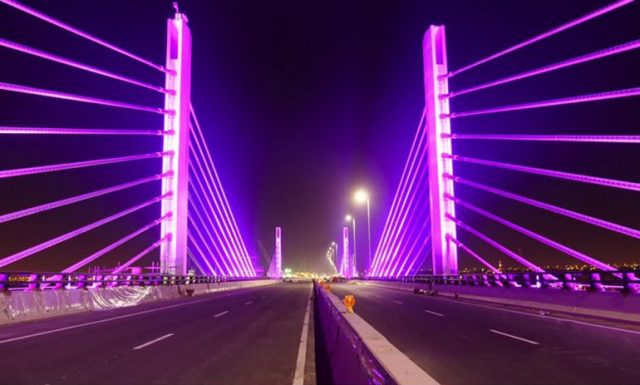 Doha: The Public Works Authority (Ashghal) has opened the first phase of the Sabah Al-Ahmad Corridor – 13km from Umm Lekhba Interchange in the north to Bu Hamour Bridge in the south. The project will open fully to traffic in the first quarter of 2021.

Seven new bridges were also opened, bringing the number of bridges opened to 21 out of the 32 bridges that make up the vital road, including three bridges at Umm Lekhba Interchange and three at Al Waab Intersection including the longest bridge, which covers a distance of 2.6 km, in addition to 1.2 km-long cable stayed bridge.

Youssef Al Emadi, Projects Affairs Director, Bader Darwish, Manager of Highway Project Department, Captain Saoud Abdullah Al hamad, from the General Directorate of Traffic, Hamad Eissa, representative from the Ministry of Transport and Communication along a number of CMC Members, officials and engineers from Ashghal and the contracting company attended the function.

The new openings will provide free traffic flow along the road passing over 12 at-grade intersections, which will shorten the travel time by more than 50 percent, as the road currently accommodates more than 8000 vehicles per hour in both directions, which will positively affect traffic on 22 February Street and provide new alternatives for road users.

On this occasion, Dr Saad bin Ahmad Al Muhannadi, President of Ashghal, stressed that the opening of the first phase of  Sabah Al Ahmad Corridor came despite many challenges that the country has recently witnessed, among them is the unjust blockade and the Covid-19 pandemic, which is evidence that the work is proceeding without interruption thanks to the country’s endless support and overcoming all obstacles to support infrastructure projects to complete them according to the deadlines.

On his part, Youssef Al Emadi, Projects Affairs Director, said that Ashghal had preceded the completion of the first phase of the Sabah Al Ahmad Corridor as it came about a year and a half after the launch of the project in February 2019, indicating that the project is expected to be completed in 2021 to add a new achievement to the Public Works Authority.

Bader Darwish, Manager of Highway Project Department, confirmed that the new openings on Sabah Al Ahmad Corridor will provide a free traffic flow all the way from Umm Lekhba Interchange on Al Shamal Road to Hamad International Airport, which will reduce traffic pressure on 22 February Street especially with the start of the new school year.

On his part, Ali Ibrahim, from the Highway Project Department, noted that the three new bridges at Umm Lekhba Interchange provide new entrances and exits to Al Gharrafa area to provide an alternative option to Al Gharrafa Interchange, (known as the Immigration Interchange).

In turn, Mohammad Sami, from the Highway Projects Department, indicated that Al Waab Interchange is witnessing its first opening after converting the traffic light to a three-level intersection, where the rest of the vital intersection work is being completed and will be opened to traffic completely in 2020.

On his part, Ali Darwish, from the Highway Projects Department, said the Cable-Stayed bridge is the first of its kind in Qatar and opening it provides a free flow of traffic between Al Waab and Bu Hamour passing by Haloul and Faleh bin Nasser Interchange on Salwa Road, pointing out that it was opened on a temporary asphalt layer to temporarily accommodate traffic in both directions until traffic is later diverted to the northern part of it, in order to preserve the quality of the final layer of asphalt.

Cable-Stayed Bridge
The Cable-Stayed bridge was designed pillar less for a distance of 150 meters, taking into account all safety factors when constructing the bridge, including supporting the bridge with 120 cables and 754 precast concrete pieces of more than 200 tons in weight and setting up 20 columns and 16 piers to reach the highest point of the bridge to 30 meters.  The bridge will cause a big leap in traffic due to its strategic location above Haloul and Faleh bin Nasser Intersections on Salwa Road, where it will receive traffic coming to and from Hamad International Airport and will reduce traffic pressure on parallel streets such as the WholeSale Market Street And Doha Expressway / 22 February Street.

The three bridges will greatly facilitate traffic movement in the area and reduce traffic pressure on 22 February Street, especially on Al Gharrafa Interchange or (known as the Immigration Interchange).
Al Luqta Tunnel

The opening includes the Luqta Tunnel that intersects with Khalifa Street, as two lanes will be opened in each direction as well, directly linking Al Luqta and Al Gharrafa, providing an alternative road to the nearby tilted intersection.

Opening new parts of Al Duhail Interchange
In parallel to the opening of the first phase of Sabah Al Ahmad Corridor, Ashghal opened the new parts of the traffic signal below Al Duhail Interchange, where the efficiency of the old roundabout was increased by converting it into traffic lights.
Ashghal had opened on Saturday, August 15, 2020, Duhail Al Gharrafa Bridge, along with parts of the traffic light, which contributed to improving traffic movement at the northern entrance to Doha, especially Duhail and Al Gharrafa.

Traffic Diversions
Some traffic diversions will remain in place along the Corridor to provide the necessary workspaces to complete the construction works for the rest of the roads and facilities, considering providing accessibility to secondary roads while taking traffic safety precautions along the diversions to avoid any traffic congestion.
In order to allow the construction work of the Cable-Stayed bridge, the Public Works Authority announces a partial closure of Haloul Interchange for a period of one month, during the traffic closure period, traffic coming from Bu Hamour Intersection on Sabah Al Ahmad Corridor will be closed towards Al Maaded traffic signal to the right and Haloul Street to the left while keeping movement open to traffic to the remaining directions as they are.
During the period of traffic change that comes in coordination with the General Directorate of Traffic, road users must use Al Judy Street and turn left at Al Ma’adeed to reach their destinations.
Diversion on Al Gharrafa
An old diversion on Al Ittihad Street (Thani Bin Jassim Street) will be canceled, road users heading east could turn back on Al Markhiya Street to reach the eastern part of Al Ittihad Street (Thani Bin Jassim Street) east of  Sabah Al Ahmad Corridor, the exit from Al Luqta Street to Al Markhiya Street will also be closed, road users will have to turn back at the tilted Intersection (Al Luqta Street) to reach the Immigration Interchange and U-turn back and enter from Al Hamlah Street to reach their destinations.

Overview of Sabah Al Ahmad Corridor
Sabah Al Ahmad Corridor will extend for approximately 25 kilometres from Hamad International Airport to Umm Lekhba Interchange (known as Landmark Interchange) on Doha Expressway. In addition, Ashghal will enhance 12 kilometres of local and peripheral roads intersecting with the Corridor. The total road works of the project is approximately 37 kilometres.
“Delivering traffic relief in Doha”

Sabah Al Ahmad Corridor will significantly contribute to the relief of traffic congestion on Doha Expressway in particular, 22 February Street once completed in 2021.

The new Corridor will be a vital alternative route that will serve thousands of daily commuters from the north to the south of Doha.

Commuters travelling from Hamad International Airport via the new Corridor will be able to reach Umm Lekhba Intersection in approximately 18 minutes compared to the current 50 minutes via Doha Expressway and 22 February Street reducing traffic time by 70%.

The new Corridor will also form a main link between the north and the south of Doha through via Doha. This interchange will also create a vital connection between Doha Expressway and Southern Part of Doha Express Highway (Al Wakra Bypass) as well as to Mesaieed Road further south through Al Watiyyat Interchange in Al Thumama where it is considered a distribution point to Doha Expressway on one side and to Sabah Al Ahmad Corridor on the other side.

The project will convert all roundabouts to more efficient and safer signalised junctions as well as build and upgrade 17 interchanges that facilitate access to and from the road from all directions, which include several connected bridges consisting of four lanes in each direction and 5 vehicle underpasses tunnels to provide free flow of traffic.

The project includes constructing 12 of pedestrian and cycle paths bridges with a length of 65 kilometres along with 1.5 million square metre of landscaping.