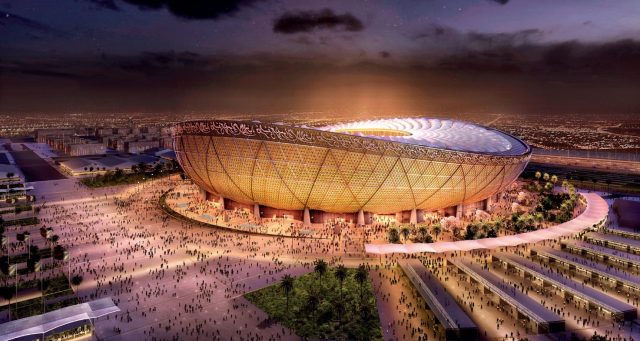 The 80,000-seat Lusail Stadium will embody Qatar’s ambition and its passion for sharing Arab culture with the world. It is here that the FIFA World Cup Qatar 2022™ final will be staged, with billions around the globe watching on.

The Lusail Stadium is set to be a historic venue for a plethora of reasons. It will be the largest stadium by capacity at the first FIFA World Cup™ hosted in the Gulf, it will be the centrepiece of a brand new metropolis named Lusail City, and its legacy after the global finals will see the stadium’s infrastructure converted into a community space including schools, shops, cafés, sporting facilities and health clinics.

To spread the legacy of Qatar 2022 around the world after the finals have concluded, Qatar’s Supreme Committee for Delivery and Legacy (SC) plans to remove and donate most of the stadium’s 80,000 seats to sporting projects across the globe.

With a design which alludes to the decorative motifs on bowls found across the Arab world, the Lusail Stadium will surely host up a feast of football for fans from across the planet in 2022.

The design of this magnificent stadium is inspired by the interplay of light and shadow that characterises the fanar lantern. Its shape and façade echo the intricate decorative motifs on bowls, vessels and other art pieces found across the Arab and Islamic world during the rise of civilisation in the region.

The venue will become the centrepiece of Lusail – a newly built, state-of-the-art metropolis, designed specifically with residents’ needs in mind. Lusail Stadium will write a new page in Qatar’s history, while paying homage to the rich past of the country and region.

With swift progress at the venue, Qatar’s vision for a truly memorable FIFA World Cup™ final stadium is quickly becoming a reality.

Located 15km north of central Doha, Lusail is a pioneer among cities. Every aspect of its planning, from its tram system and plentiful green spaces to this sustainability-focused arena, concentrates on human needs and environmental conservation. The result will be a city where 200,000 people live in harmony with the environment – and enjoy the legacy of this spectacular stadium.

Once the FIFA World Cup Qatar 2022™ is over, Lusail Stadium will be transformed into a community space including schools, shops, cafés, sporting facilities and health clinics. This multi-purpose community hub will allow people to find everything they need under one roof – the original roof of the football stadium.

During the conversion, most of the stadium’s 80,000 seats will be removed and donated to sporting projects, taking this arena’s extraordinary legacy – and a little bit of FIFA World Cup™ history – to locations around the globe.