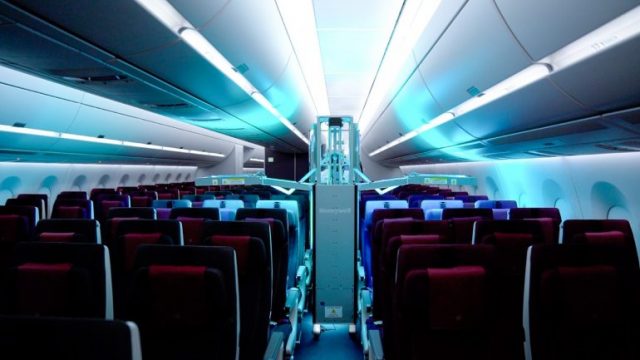 Qatar Airways has begun to disinfect aircraft using ultraviolet technology. The Doha-based carrier is using technology from Honeywell, and says it is the first global airline to be using this technology.

The aviation industry has had to rapidly change course due to the current crisis. The COVID-19 pandemic has been unprecedented in its effects on the world. As a result, passenger numbers are down.

Before the crisis, emissions and sustainability were the number one topic for aviation. However, while remaining critical, health and hygiene have had to take center stage for the time being. Due to this, many innovations are currently being made, especially around sanitization.

Qatar has been continuously innovating throughout the current crisis (more on that later), and never let its route network drop below 30 key destinations worldwide during the darkest days of the COVID-19 problem.

The latest innovation being seen inside the Qatar Airways cabin is a product of Honeywell. Honeywell has produced a device around the size of a beverage cart to clean its aircraft. The machine has extendable arms that emit ultraviolet light that kills viruses and bacteria.

Currently, Qatar Airways has just six of these sanitization devices. They are being used where possible, but the airline doesn’t have enough to clean every aircraft. However, Qatar is hoping to secure additional units. With these, they would clean all of the planes with UV while they are turned around in Doha.

“We are pleased to be the first global airline to operate the Honeywell UV Cabin System onboard our aircraft. In clinical tests, UV light has been shown to be capable of inactivating various viruses and bacteria when properly applied at specified doses.”

While Qatar claims to be the first ‘global’ airline to use Honeywell’s robot, it’s been beaten to the punch by a US-based carrier. JetBlue has been trailing the same technology since July, although it is yet to deploy it on a large scale. You can see it in action below:

What else is being done?

While some airlines haven’t enacted many changes due to the current pandemic, Qatar Airways is taking as many precautions as possible. For example, the airline became one of the first to make crew wear full personal protective equipment, including suits, masks, and glasses. The Qatari carrier is also making passengers wear both a face mask and a face shield for the duration of their flight.