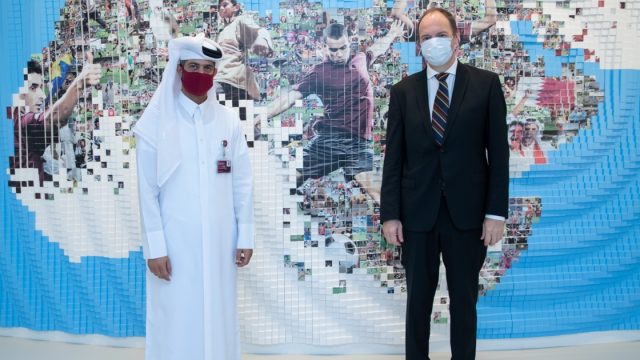 The Belgian Ambassador to Qatar congratulated the FIFA World Cup 2022™ hosts on their ‘impressive and integrated’ tournament preparations during a visit to the Supreme Committee for Delivery & Legacy (SC).

De Groof, who took up his post in Doha in 2017, told www.qatar2022.qa he is hugely impressed with Qatar’s infrastructure progress.

“The progress is very, very impressive,” said De Groof. “When I arrived here, Khalifa Stadium was being redeveloped and Al Janoub was being built. Now, all the other stadiums are coming up and it’s exciting to see them as they are huge landmarks. I think all the stadiums are really beautiful and I must congratulate the SC and Qatar with the speed of development. Everything is on schedule – not only the stadiums but all the infrastructure, including the roads and metro. The whole process is very integrated and it’s really impressive to see.”

In addition to hearing the latest tournament progress, De Groof was also informed about the recent AFC Champions League West Zone tournament, which took place in Qatar following the implementation of strict COVID-19 regulations. Bubble-to-bubble protocol and regular testing for the players, officials and staff meant potential COVID-19 outbreaks were minimised. During the tournament, more than 7,900 tests were carried out, with a positive rate of just 1.7%.

As for the Belgian national team – which is currently ranked number one by FIFA – De Groof is hoping his countrymen can improve on their showing during Russia 2018, where they reached the semi-finals.

He said: “We have an amazing team at the moment – a golden generation. They have been doing extremely well and winning most of their matches. Our players are active in Europe’s most competitive leagues and many of them have been playing for the national team for many years now. They have done well in recent tournaments and are growing together.”

By the time Qatar 2022 comes around, De Groof will have been replaced as Belgian Ambassador. However, he would like to return to Qatar to sample the first FIFA World Cup™ in the Middle East and Arab world.

“I hope I get an invitation to come back,” said De Groof. “We are optimistic about qualifying and of course I would like to return to Qatar for the tournament and see the crowning glory. It will be wonderful to see the achievements realised, to see the players and fans enjoying the tournament after all these years of preparation.”