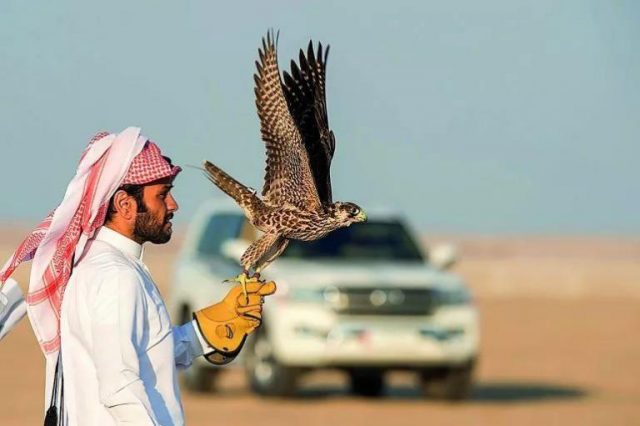 The Al Galayel Championship, a hunting and falconry competition set in the desert, is another celebration of Qatar history and tradition, involving four days of hunting houbara, gazelle and curlews.

The Algalayel Championship of hunting is considered one of the most important tournaments of its kind in the world. This thrilling competition is set against the canvass of the beautiful South Qatari desert and features the traditional skills of the Qatari hunter that have been passed down through countless generations..  Each team is composed of 6 to 8 members. The competition comprises 4 heats each of 4 teams. The winner of each heat goes through to the final.  Algalayel his held over a 900 square kilometers area in a magnificent nature reserve in the south of Qatar. The contestants hunt antelope, bustards and Karawan. The organizing committee of the tournament provides the quarries, which are released strategically during the course of the competition. Quarries are tagged with Algalayel Championship identifiers.

The Algalayel provides a living example of the rich heritage of Qatar so that the youth of the country understand better their legacy. The competition provides great examples of strong, wise role models for all the people of Qatar and the Gulf. The traditions inherent in the desert life and what it teaches in terms of skills, sophistication, intelligent leadership, and the art of coexistence are televised and coverage is of an extremely high standard utilizing local and international filmmakers.