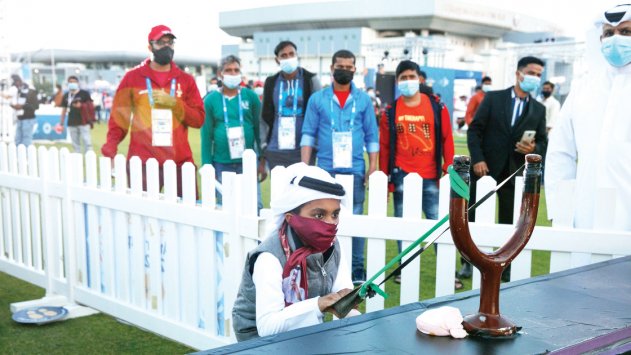 Football fans were treated to a special occasion on Qatar National Day, as the 48th Amir Cup final became the first official match to be played at Ahmad Bin Ali Stadium. The 40,000-capacity venue is the fourth Qatar 2022 stadium to be inaugurated with just under two years to go until the country hosts the first FIFA World Cup™ in the Middle East and Arab world.

As part of the festivities on 18 December 2020, the Community Engagement Division of the Supreme Committee for Delivery & Legacy (SC) partnered with various stakeholders, notably the Ministry of Culture and Sports and Qatar Olympic and Sports Museum (QOSM), to operate a Fan Zone outside the stadium.

A range of activities and cultural offerings were on offer both prior to kick-off and after the final whistle. This included roving and on-stage performances from various community groups including Bangladesh, Egypt, Ghana, Hungary, India, Kenya, Mexico, Nigeria, Palestine, Sudan and Uganda.

“What we wanted to achieve with the Fan Zone was to not only celebrate the opening of another World Cup venue, but also to highlight the diversity of Qatar’s many communities,” said the SC’s Stakeholder Relations Senior Manager, Khaled Al Suwaidi.

“Their excitement for Qatar 2022 has been unwavering, so it was great to see our local communities get involved and make a contribution to the festive atmosphere we created on National Day,” he added.

Al Suwaidi continued: “I would like to thank our community groups, along with our valued stakeholders – particularly the Ministry of Culture and Sports and Qatar Olympic and Sports Museum – for their support in organising the Fan Zone. After a difficult year for everyone, it was great to see so many smiling faces enjoying the festivities and marking the inauguration of the fourth Qatar 2022 venue.”

The Ministry of Culture and Sports, tasked with nurturing a growing and inclusive cultural environment throughout Qatar, organised a series of activations at the Fan Zone. These included traditional activities such as folkloric games that form the backbone of a vibrant sports culture in Qatar.

“The Ministry’s participation was primarily through the Nomas Educational Center, which set up a majlis that visitors had the chance to engage with, showcased a traditional musical instrument known as a rababa, and hosted falconry, along with a wide variety of traditional games,” said Aisha Al Mahmoud, Director of PR & Communications at the Ministry of Culture and Sports.

“It was important for us to showcase Qatari culture at the country’s most prestigious footballing event on our National Day, an occasion that was made even more special with the inauguration of Ahmad Bin Ali Stadium, which will host matches during Qatar 2022,” she added.

Additionally, the Ministry organised a robust display dedicated to the heritage of Al Rayyan SC, widely recognised as one of Qatar’s most widely supported football teams. This included both video content and a photography exhibition.

The Fan Zone also featured a series of activations organised by QOSM, a cultural institution dedicated to promoting the positive value of sport through showcasing the origins, development and significance of sporting culture within Qatar and beyond.

A Qatar Museums initiative, QOSM activations at the Fan Zone included children’s activities that were inspired by the colours of the Olympic rings, a mini five-a-side football match and live colouring of football jerseys with the emblem of Al Rayyan SC, the Qatar Stars League team that will make Ahmad Bin Ali Stadium its home.

“We are delighted with the enthusiastic response to the activations organised by Qatar Olympic & Sports Museum during the Amir Cup final, particularly because they were all designed to inspire communities across Qatar to lead an active lifestyle, which we see as one of the key legacies of hosting large sporting events like the Amir Cup and the FIFA World Cup Qatar 2022,” said Ahmad Al Namla, CEO of Qatar Museums.

The SC has continued to engage thousands of people in Qatar as the country’s FIFA World Cup preparations continue. Despite the ongoing pandemic, a variety of programmes and initiatives run by Community Engagement have thrived in 2020 as Qatar aims to involve everyone on its World Cup journey.

Read more about the work carried out by the SC’s Community Engagement Division in the past year.