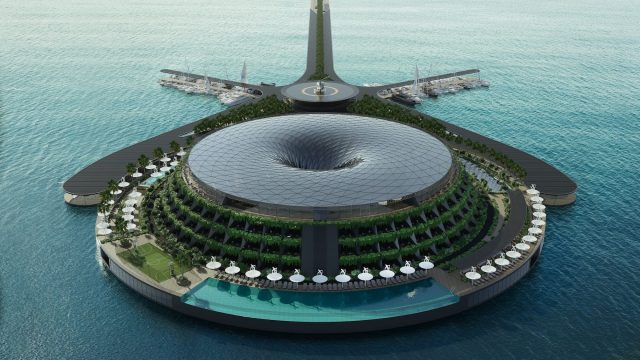 The eco-floating hotel is inspired by the sea with which it is associated in the first degree in terms of form and design principle. At this point, it is worth to mention that the project will work efficiently in areas where there is a continuous and certain flow. However, the sea which gives the structure physical and tangible power and receives the return it needs in a mutualistic form also directs the shape of the structure with the idea of the whirlpool. If it is accepted that the water formed and disappeared by itself forming a rotation around itself in a regular flow and the shape is considered to have risen with its borders and evolved into a platform, it will give a transparent mass silhouette. It was this image that fed and supported the project. The idea of the whirlpool, which reflects the rotational effect found on the surface of the water to the upper cover of the structure does not only remain in this layer and seeps into the mass with a capillary effect.
The unique circular-shaped hotel will feature a range of rooms complete with luxury amenities, which could also generate its own electricity with the help of solar, wind and tidal energy

Known as one of the world’s biggest holders of natural gas and oil reserves, Qatar has long been synonymous with wealth and luxury—a destination that appeals to discerning travellers with a taste for the finer things in life. So, it should come as no surprise that the Middle Eastern country will become home to a fancy eco-floating hotel.Designed by Hayri Atak Architectural Design Studio (HAADS), the hotel will feature a sustainable spinning design that can help generate its own electricity via solar, wind and tidal energy, with no waste from the structure going to the landfill or harming the environment. The vortex shape of the roof would be used to collect rainwater for irrigating the greenery, where carefully designed solar panels and wind turbines are also available to provide power.

Spanning over 35,000 square meters, the hotel, which is only accessible by a pier connected to the shore, helicopter or boat, will feature a massive 700-square-metre lobby area and 152 rooms that complete with private balconies for guests to enjoy sweeping sea views from different perspectives as the structure revolves. That’s not all, the hotel will also include indoor and outdoor swimming pools, a spa, gym and even a miniature golf course.According to the design studio HAADS, the project is still in its initial concept process. Technical and feasibility and technical studies will be carried out continuously in order to realise the implementation phase by 2025. 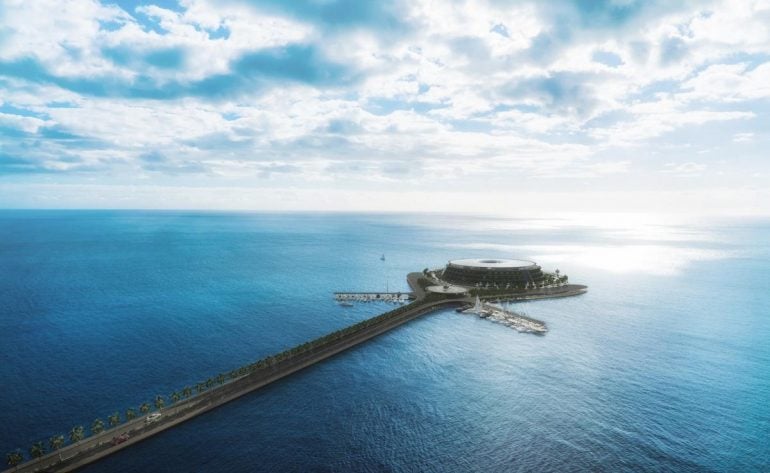