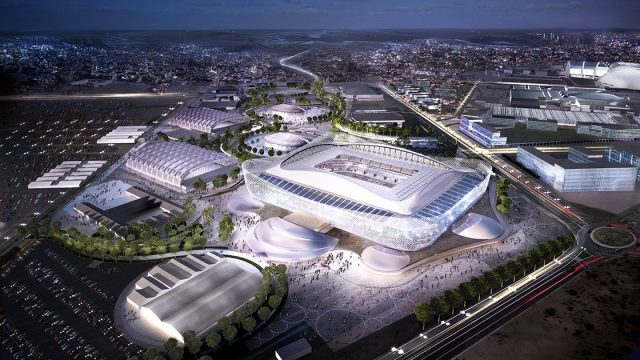 An exciting new dawn is coming to one of Qatar’s most historic cities, which sits close to Doha on the way to beautiful desert landscapes.

Due to its location on the edge of the desert, preserving nature has long been a priority in Al Rayyan – and this arena fits perfectly with the ethos of one of Qatar’s most traditional cities. Every part of the stadium district has been designed with sustainability in mind. After the 2022 FIFA World Cup Qatar™ has come to a close, Qatar’s Supreme Committee for Delivery and Legacy (SC) plans to remove almost half of the stadium’s 40,000 modular seats and give them to football development projects abroad.

The smaller post-tournament arena, meanwhile, will continue to take pride of place in Al Rayyan, particularly among fans of the much-loved local football team, Al Rayyan Sports Club. Built on the site of club’s former ground, the Al Rayyan Stadium incorporates symbols of Qatari culture into its spectacular undulating façade, while the surrounding facilities and sand dune-shaped structures also reflect the surrounding land.

The gateway to the desert opens its doors to the world

Al Rayyan is known for its love of traditions and local culture, as well as its hugely popular football team, Al Rayyan Sports Club. The close-knit community here is deeply committed to the team, whose new arena will host up to 40,000 fans at FIFA World Cup 2022™ matches.

Built on the site of Ahmed Bin Ali Stadium, the new Al Rayyan Stadium will incorporate symbols of Qatari culture into its spectacular undulating façade. The facilities surrounding the venue will also mirror the country, with sand dune-shaped structures recalling the beautifully wild lands to the west.

Al Rayyan will welcome football fans from around the world with open arms, eager to show them the rich culture of Qatar.

Learning from the past to protect the future

Thanks to its location on the edge of the desert, preserving nature and its gifts has long been a priority in resilient Al Rayyan – and this arena will be no different. The Supreme Committee for Delivery & Legacy will deliver the venue using environmentally friendly building materials and practices.

Every part of the stadium district has been designed with sustainability in mind. After the FIFA World Cup Qatar 2022™ has come to a close, almost half of the stadium’s 40,000 modular seats will be removed and given to football development projects abroad. The smaller post-tournament arena will enable Al Rayyan to maintain the intimate, neighbourly character it’s famous for.

Al Rayyan’s location on the edge of the desert has shaped a resourceful city that does not tolerate waste.

Therefore, from its very conception, the Al Rayyan Stadium project has had sustainability at its core, backed by the commitment of the Supreme Committee for Delivery & Legacy to green construction.

Many of the materials from the deconstructed Ahmed Bin Ali Stadium that once occupied this site will be used throughout the new stadium complex – and some will even find a place in public art installations. Over 80% of the construction materials are being reused or recycled. Trees that once surrounded the old venue have been retained for future replanting, minimising damage to the natural environment.

Any new materials required for construction are carefully chosen for their environmentally friendly qualities.

A venue for tomorrow

Energy and water efficiency measures will be put into place, and further reductions in the stadium’s carbon footprint come as the metro connection being delivered by Qatar Rail is now complete. Al Rayyan precinct will have conveniently located bike lanes and walking paths, as well as 125,000m2 of new green space featuring native, low-water-consumption plants for the community to enjoy.

By the time Al Rayyan Stadium hosts its first FIFA World Cup 2022™ match, football fans will be travelling via an environmentally friendly metro system to a truly sustainable venue.