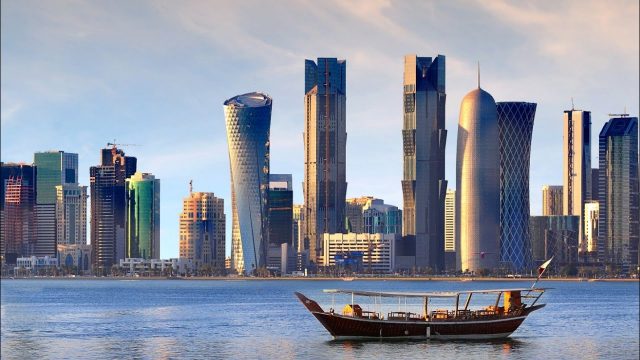 Qatar being one of the richest countries in the world is home to many of the skyscrapers & tallest Buildings.

To Find out the Answers Scroll Below 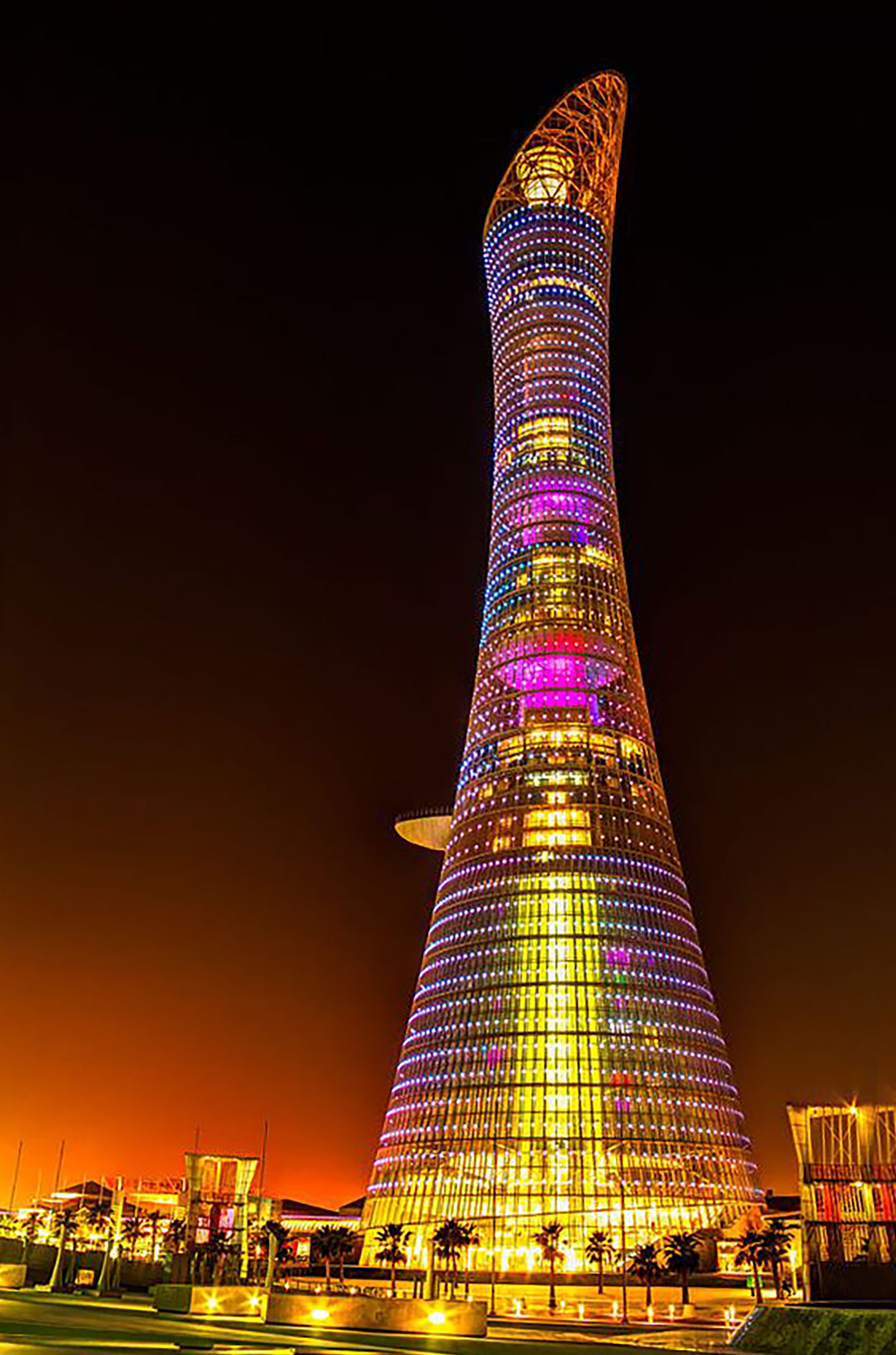 The Aspire Tower was built to house the Symbolic Flame of the 2006 Asian Games. The design symbolizes a hand grasping the torch that sits at the tower’s top. The tower houses a five-star hotel, a sports museum, a health club with a cantilevered swimming pool, a revolving restaurant, and an observation deck.

The structural design features a concrete core enveloped in a steel mesh. The cone and lattice shell that house the torch rest atop this structure. The core supports the clusters of floors, which are all cantilevered up to 11.3 meters (37 feet) out from the core. The primary support beams extend radially from the core to steel columns on the outer edge of the structure.

The building features a swimming pool 80 meters (260 feet) above ground that is cantilevered from the core, and extends out 12 meters (39 feet) from the façade. Elliptical in plan, the pool is supported on a substantial steel truss structure some 4 meters (13 feet) deep. The plan geometry of the truss is straight from the core to the column locations, and then elliptical with approximately the same shape as the pool. The truss is connected to the core and supported on two columns that continue down through the levels below, which are supported on vertical trusses.

The façade consists of an energy-efficient glass skin, and helps efficiently maintain comfortable temperature levels in the desert climate. 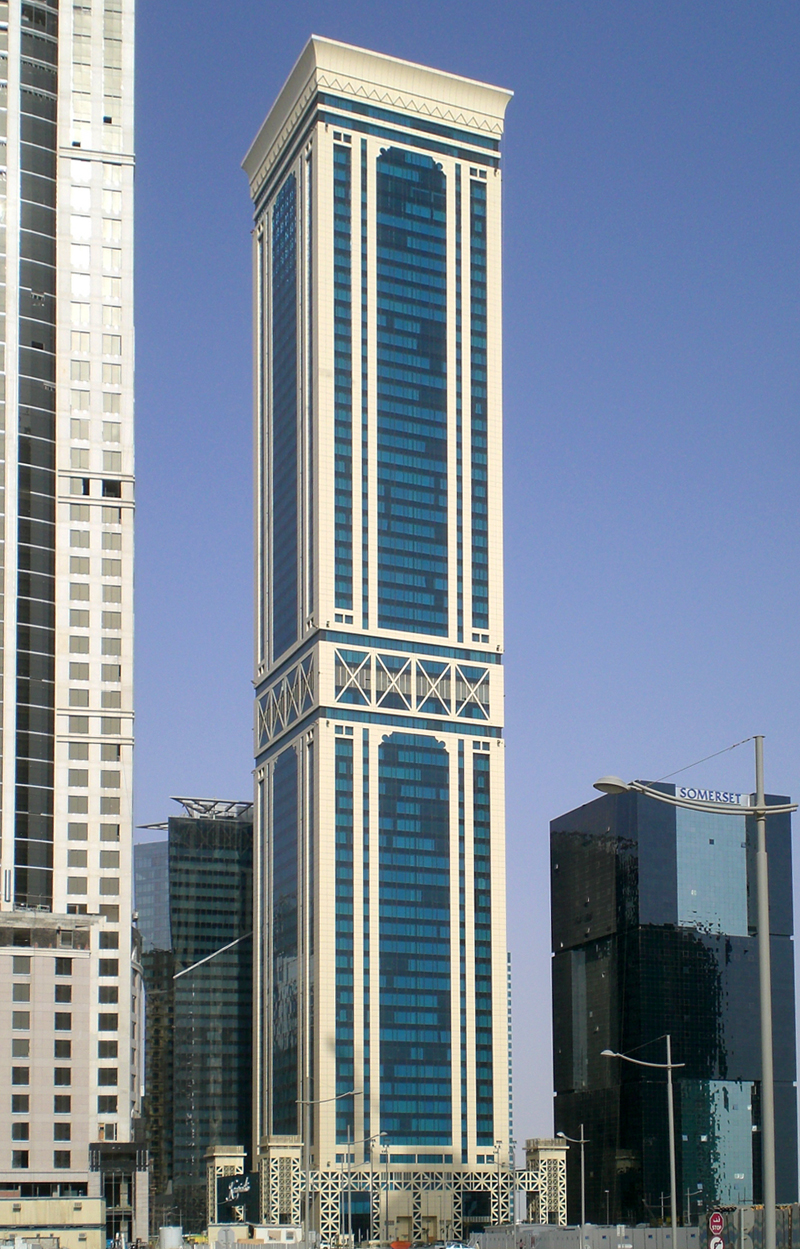 The tallest residential tower in Qatar, housing 370 high-end apartments, Alfardan Residence uses architectural elements traditional to the gulf area in its design; from the idea of the “wind tower” which was used as a means for effective heat dissipation, to the incorporation of façade elements such as the traditional arch, recesses and a cornice that punctuates the tower. These elements give the building a tangible reflection of the rich gulf traditions.

The plan arrangement of the building allowed the structural engineers to make use of the outer internal corridor wall rather than the more traditional inner wall as the key element of the structural core, greatly increasing its stiffness. This, combined with the use of outriggers to engage the perimeter columns of the building, removed the need for a reliance on tuned mass damping systems while minimizing building sway and accelerations under wind loads to within acceptable levels for occupant comfort. 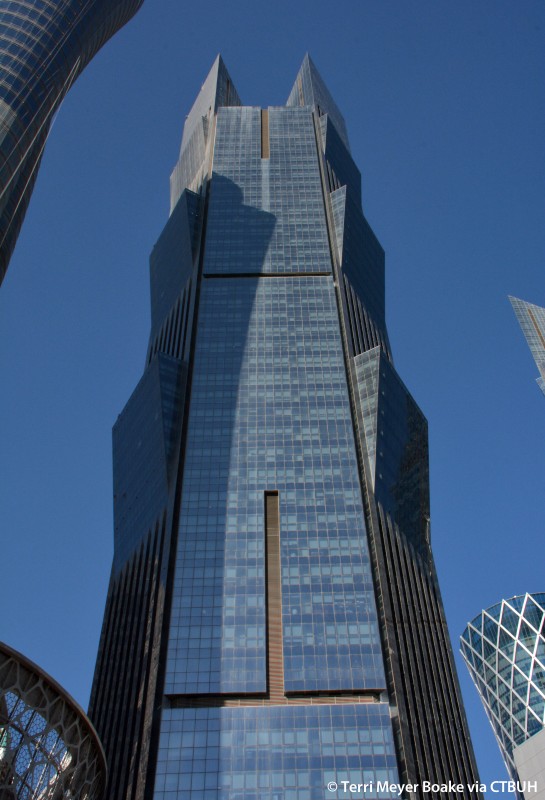 Inspired by the native palm trees of Qatar, the Palm Towers in Doha rise as an icon of the city’s cultural memory. The palm tree is a symbol of survival, and the form of these towers is meant to represent the continuance and success of the surrounding community. To create the design for the towers, the detailing of the façade and the crown were treated to be reminiscent of the plant itself. The faces of the buildings are punctuated with stainless steel fins as well as geometric manipulations of the form to accomplish this imagery.

Standing as landmarks in Doha’s quickly expanding commercial district, the slender twin towers have a variety of office spaces to cater to the needs of its users. The circular core and hexagonal form contribute to the layout’s efficiency. At the base, the towers are connected by an eight-story parking podium to serve all visitors and occupants. 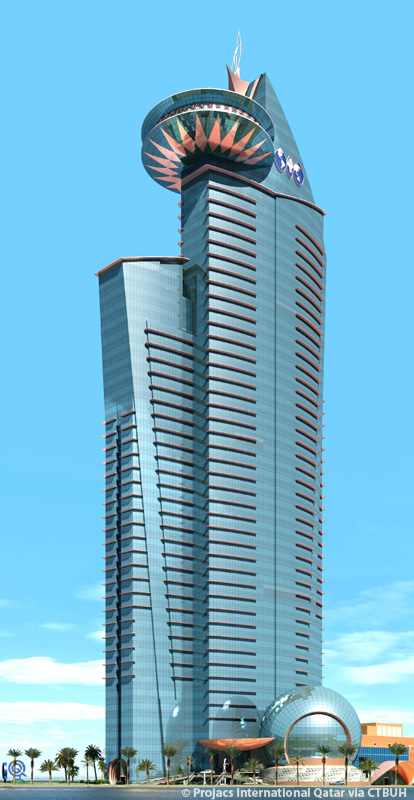 Standing at 241.1 meters high with 51 floors above ground, the World Trade Center Doha building is one of the prominent buildings along Doha Corniche and is known for housing Qatar Petroleum’s headquarters. The landmark consists of a podium, a high-rise building, a low-rise building, and a sphere. The 50-storey building was completed in 2013. 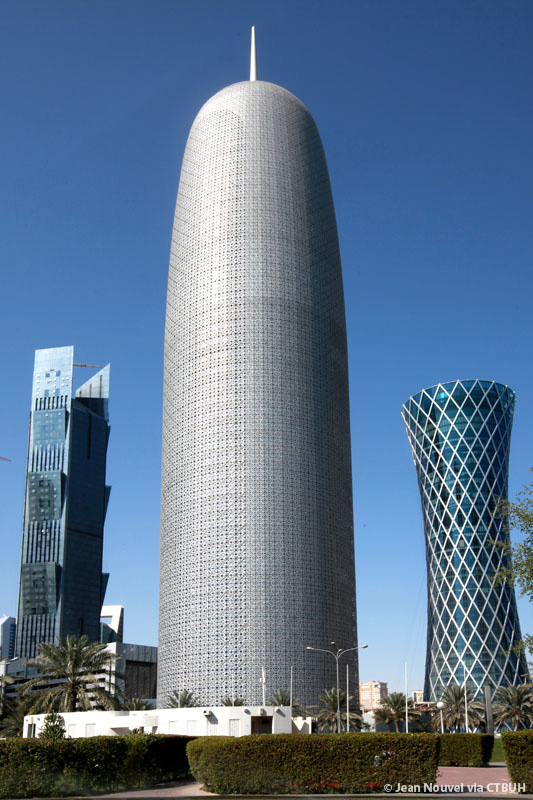 Located on a prominent coastline thoroughfare in the Qatari capital, Al Corniche Street, Doha Tower adds a prominent yet subtle addition to the Doha cityscape. Located near the ministries and government departments as well as the future Al Bidda metro station, the location on the waterfront is ideal. The cylindrical form of the tower was decided upon for its efficiency in floor-to-window area and relative distances between offices and elevators. Additionally, the core of the building has been shifted off-center to allow more flexible floor area for the office spaces.

Overlooking the Gulf, the tower provides floors of offices, a restaurant with panoramic views, and a private residence at the penthouse. The tower is topped by a full-span dome and a spire, and clad entirely in an intricately patterned stainless steel screen.

The cladding system is a reference to the traditional Islamic “mashrabiya,” or artistic screen used for shading or room dividing. The design for the system involved using a single geometric motif at several scales, overlaid at different densities along the façade. The overlays occur in response to the solar conditions: 25% opacity was placed on the north elevation, 40% on the south, and 60% on the east and west. From afar, the screen appears as a uniform density, but the intricacy of the layering and scaling of the screens becomes apparent at a closer viewpoint, lending the building multiple textural experiences.

Behind the shading layer is a typical curtain wall system that is accessed for maintenance from walkways in the cavity between the two layers. User-operable solar shades are also available behind the glazed curtain wall. The overall façade system is estimated to reduce cooling loads by 20%. At night, an integrated lighting system enhances the delicate screen with programmable light shows.

The base of the tower has a 25-meter-wide pergola to provide a shaded entry, as well as a lushly planted garden. A gentle grade slopes down to the lobby entrance, emphasizing the tower’s connection to the earth supporting it. Landscaping covers 40% of the site, adding to the pedestrian experience. Below grade, three levels of parking accommodate a total of 870 cars solely for the office tenants.

A large interior atrium houses eight glass lifts; the atrium reaches a height of 112 meters, up to level 27 which offers a transfer lobby between low- and high-zones. The transparent lifts offer views of the surrounding city. The structure of the tower is a non-traditional concrete diagrid with canted columns forming an X-shaped framing system. This system creates a unique effect in the office spaces in conjunction with the façade screen. In contrast to more typical office towers, the spatial quality of the interior is one of ever-changing patterns of light and texture, breaking the standard of monotony.

The office floors are flexible and allow a variety of configurations. In addition, the latest technology has been provided for office tenants, including fiber optic telephone cables and satellite TV. Though the efficiency of the plan was the highest priority, the overall form of the building gives each floor a unique size and a slightly different effect.

In an unexpected twist from most office towers, a grand private residence is located within the dome of the tower at 182 meters above ground level. The luxury residence has its own private entrance into the building and elevator service, along with private access to the adjacent restaurant below. The breathtaking effect of the culmination of the dome structure and screen creates a truly singular space. Included in the residence are a sauna and pool along with typical residential amenities. Offering 360 degree views of the surrounding city, the residence is truly like no other.

Building upon previous projects, the design team utilized knowledge gained in other contexts to bring the building full-circle. The tower makes a distinct and direct connection to the local culture and practice through the use of the façade screen while responding to the climate appropriately. The design provides a flexible, efficient, and interesting workplace for office occupants and considers the needs of the owner. Lastly, the building makes an iconic statement and stands as a trademark of the Doha skyline in both daytime and nighttime though its textural façade and integrated architectural lighting.

Have you been to any of these iconic buildings? Let us know in the comments!