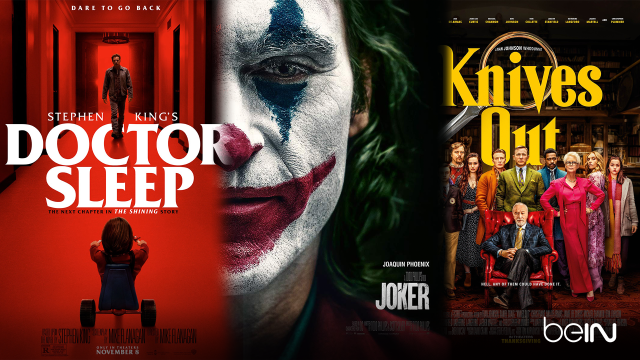 DOHA – 17 October 2021 – This Spooktober, beIN MEDIA GROUP, the global sports and entertainment broadcaster, is featuring a series of scary movies that promise to keep you in suspense and on the edge of your seat – featuring several movies from the “King of Horror” himself. So, we invite you to stock up on all the candy treats, put a candle or two in the carved pumpkin, lock all the doors, and get ready to scream the house down.

DOCTOR SLEEP (2019) directed by Mike Flanagan is a supernatural horror film based on the book by the legendary Stephen King. It is the sequel to King’s classic scream fest, The Shining. This nerve-racking movie stars Ewan McGregor, who is hoping for a peaceful existence after his childhood trauma but finds himself on a mission to protect a young girl from a sinister cult. Available to watch on Friday, October 29 at 13:15 MECCA (beIN MOVIES 3).

Later that evening, beIN will be showcasing JOKER (2019) directed and produced by Todd Phillips and starring Joaquin Phoenix and Robert De Niro. This comic book homage about Batman’s nemesis, the Joker, is a psychological thriller set in 1981. It delves into the backstory of the character’s failed attempt at being a career clown and his distressing, rapid descent into insanity. Joker grossed over $1 billion at the box office and won the Academy Award for Best Actor (Joaquin Phoenix). Catch it at 21:30 MECCA (beIN MOVIES 3) for a jam-packed day of scares.

KNIVES OUT (2019) directed by Rian Johnson is a crime thriller starring Ana de Armas and Daniel Craig. The mystery begins with the murder of the 85-year-old head of a powerful, yet dysfunctional family. Each family member is then suspected of committing the murder in this modern twist of a traditional whodunnit. This critically acclaimed picture recently received the green light to produce a sequel, with Knives Out 2 already in production. Tune in on Saturday, October 30 at 21:30 MECCA (beIN MOVIES 3).

And, for the main Fright Night event – if you dare – don’t miss IT CHAPTER TWO (2019). Directed by Andres Muschietti, this watch-behind-a-cushion extravaganza stars Jessica Chastain and James McAvoy. It is the second installment of the supernatural horror film based on Stephen King’s famously terrifying novel, IT. King built a career on scaring people with his imagination and this film, starring the evil clown Pennywise, is sure to make you question your afternoon’s choice of entertainment – airing on Sunday, October 31 at 14:00 MECCA (beIN MOVIES 3).

Didn’t see what you’re looking for? beIN has heaps more spooky entertainment content over on their other channels and on beIN ON DEMAND – including SPIRAL: FROM THE BOOK OF SAW, CLOVERFIELD, and several titles from THE CONJURING universe.

For all the ghostly picks on beIN for Fright Weekend, visit: https://www.bein.com/en/october/

beIN MEDIA GROUP is a leading independent global media group and one of the foremost sports & entertainment networks in the world. The group distributes and produces an unrivalled array of entertainment, live sport and major international events across 5 continents, 43 countries and in 9 different languages spanning Europe, North America, Asia, Australasia and the Middle East & North Africa (MENA).

beIN MEDIA GROUP’s flagship sports network, beIN SPORTS, holds the single largest portfolio of sports rights of any global broadcaster; and through its iconic MIRAMAX film studio, beIN holds an extensive library of Hollywood blockbusters while having a growing presence in series and movies production and distribution, as well as in the digital space. beIN MEDIA GROUP acquired Digiturk, the leading pay-tv operator in Turkey, in August 2016; and now has over 55 million subscribers worldwide.

Superfood to Eat Your Way to Healthier and Stronger Hair

The crescent moon of Ramadan was seen in multiple locations in Saudi Arabia. 1st day of Ramadan will be on Saturday, 2nd April 2022 ...

Hayya Hayya (Better Together) is the first of a selection of singles to be released from the multi-song FIFA World Cup Qatar 2022™ Official Soundtrack.

The uplifting track, featuring Trinidad Cardona, Davido and Aisha, draws on R&B and reggae influences and will play a central role in tonight’s final draw for the tournament.

FIFA continues to build on the FIFA Sound strategy announced in early 2021 and to connect with audiences worldwide through the shared passions of football and music.

The single is available on multiple platforms and the song’s official video has premiered on FIFA’s YouTube channel.