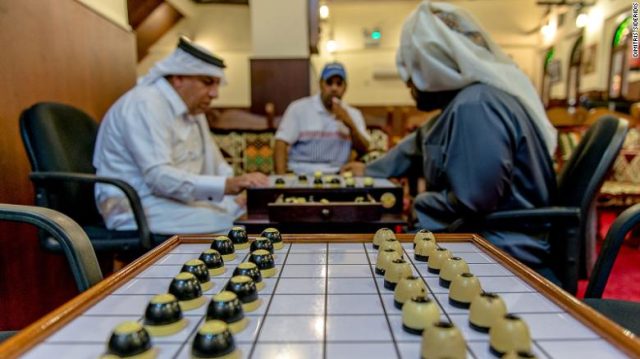 Once a vital part of daily life in Qatar, the board game known as Dama fell out of fashion for many years after the introduction of electronic entertainment. Recently, however, efforts to revive the game seem successful, as it is now included as part of the National Sport Day activities, beginning in 2012.

Believed to originate in ancient Egyptian society where it was played only by royals, Dama resembles checkers in many ways. It is played on a board of 64 squares, alternating black and white, with flat disks of two different colors. Usually, these disks are black and white, but for our illustration, they are red and blue. To start, each player places his or her pieces along the second and third rows of the board on opposite sides. Whichever player has white, or for our illustration red, goes first.

A player can move his or her piece one space forward or one space to either side. You cannot move normal pieces backwards. If an opponent’s piece is in that square with an empty space on the other side, you can jump that piece and take it from the board. If a series of jumps will remove more pieces, you can continue moving until all possible pieces are captured. The rules require players to choose the move that captures the most pieces, and failure to do so forfeits the game.

If a piece reaches the back row of the opponent’s side of the board, it will be ‘crowned’ and earn the ability to move any amount of spaces horizontally or vertically, like a rook in chess, but it can only capture a piece if it can jump a single space and land on an empty space on the other side. The game ends when a player can no longer make any legal moves, often because there are no pieces left on the board.