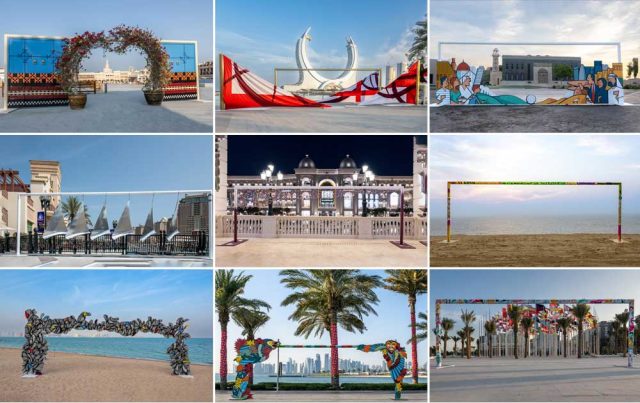 Doha: Ten artistically decorated goalposts have been unveiled at several iconic landmarks in Qatar. The Insta-worthy art installations named “Posts of Qatar” significantly adds into the country’s art scene and football atmosphere ahead of the much-awaited FIFA World Cup Qatar 2022.

The ten goalposts are made by artists from nations which have previously won the FIFA World Cup.

In a sneak peek by Qatar Tourism, it showed the Uruguay post located in Place Vendome while England is located at the Lusail City Marina. Fans of France team may visit The Pearl-Qatar to snap photos of the dedicated goal post.

Olá to Brazil fans as its colourful and detailed goal post is planted at the Museum of Islamic Art Park, while Italy’s is located at Katara Cultural Village. Spain’s post is located at the Inland Sea; Germany at West Bay Beach.

Qatar, the tournament’s host country this year, has two dedicated goal posts which can be found in Flag Plaza and Souq Waqif.

“Posts of Qatar” is on view to the public in November and December.

The artists who made the installation include Hugo Dalton from England; Guillaume Rouseré and Maryam Al-Suwaidi from France; Jordi Gil Fernandez from Spain; Ale Giorgini from Italy; Simon Kef from Germany; Simo Vibart from Argentina; Josefina De León Sorhuet from Uruguay; and Camila Gondo from Brazil.

Some of the Qatar-based artists involved are Fatima Alsharshani; Abdulaziz Yousef; and Ghada on Instagram.

Directions to each of the goal posts can be found below: 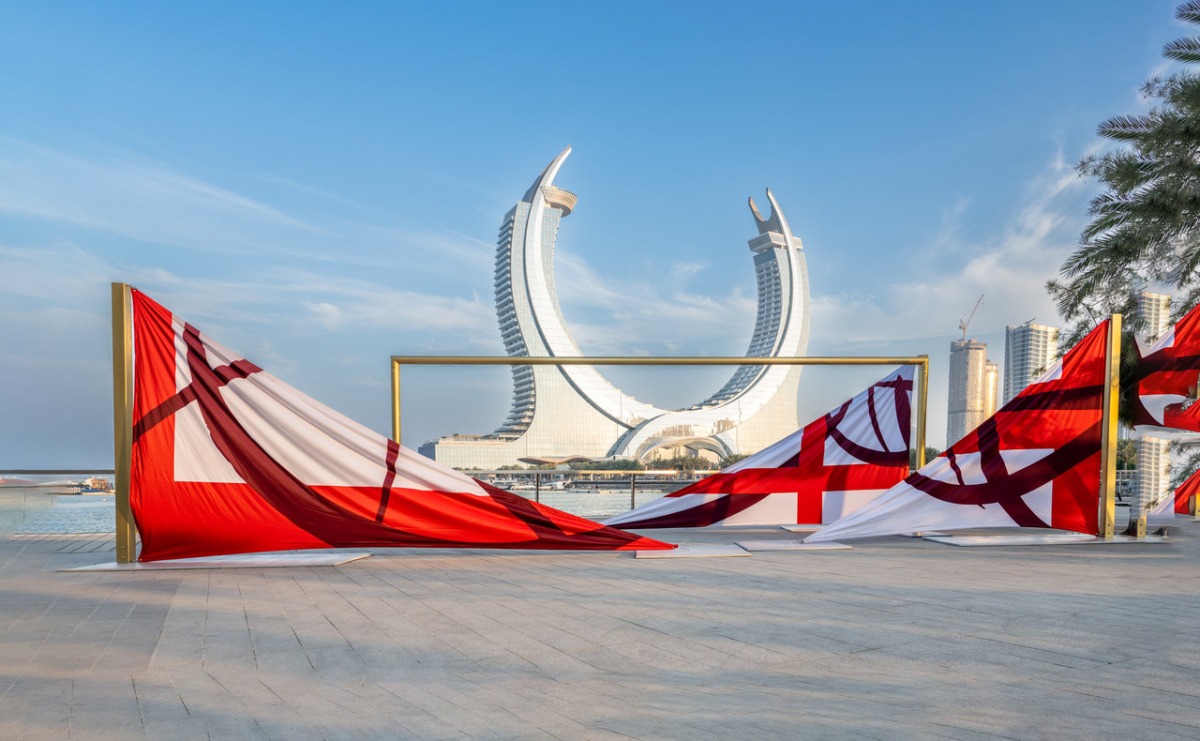 England and Qatar’s shared history as seafaring nations provided inspiration for Hugo Dalton’s goalpost, set by the shore at Lusail City Marina. England’s three lions, its St George’s Cross and the triangular sails of traditional Qatari dhow boats are all referenced in the sweeps of fabric that surround the post. As they ripple in the breeze, one can see the graceful movements of a young footballer in motion as drawn by the artist and a sea of English flags being proudly waved by fans as they watch their team in competition. The gold frame represents the nation’s victory in 1966, when the England team became World Champions. 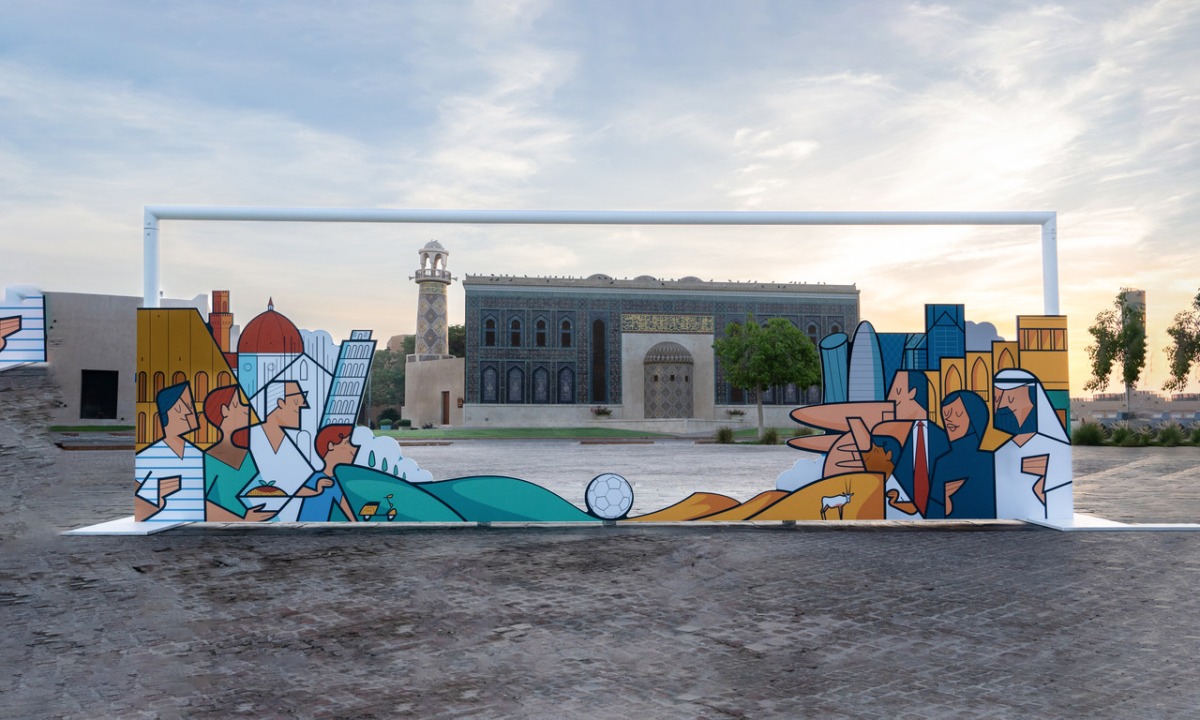 Always believing that there’s more that unites us than divides us, Italy’s Ale immediately noted similarities between Doha’s Katara Amphitheatre and Rome’s ancient Colosseum. That realisation was the starting point for a creative concept that pairs Italy’s icons with their Qatari contemporaries – from their shared love of art, ground-breaking architecture and warm character that places such emphasis on friends and family, it turns out these two distinct nations have so much in common. 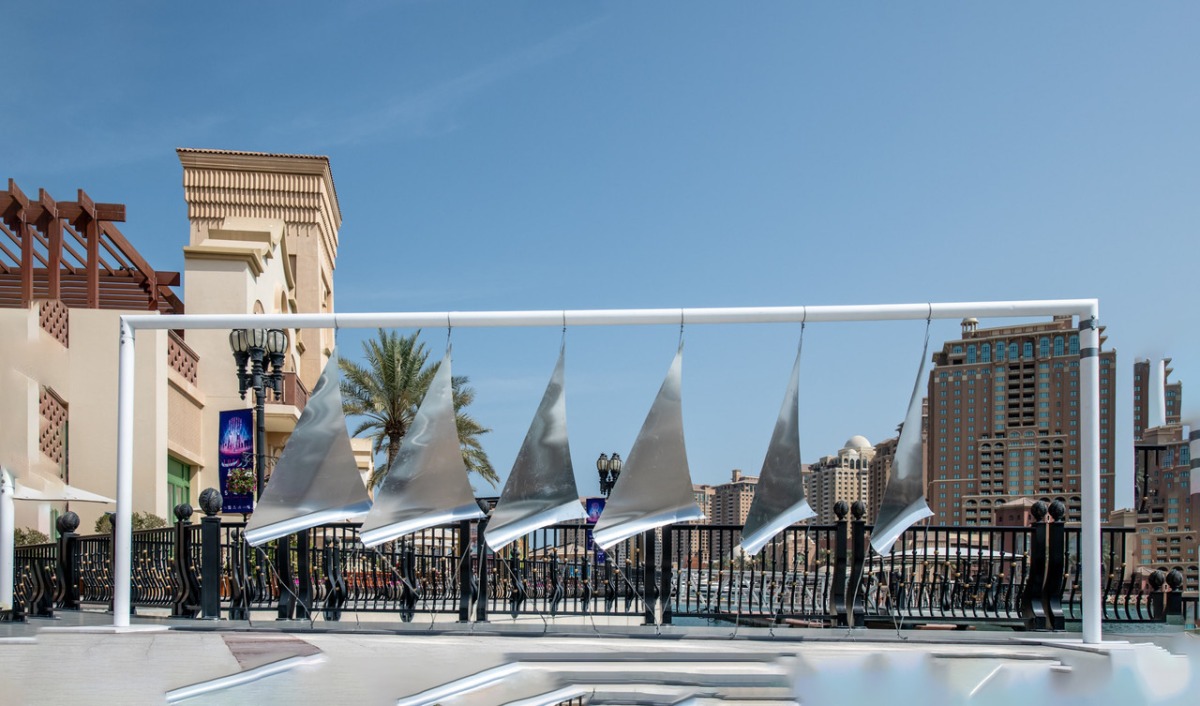 If you take a walk through The Pearl-Qatar, you’ll be sure to catch a glimpse of this goalpost and its glimmering metallic dhow sails winking in the sunlight. Come a bit closer however, and you’ll begin to hear whisperings of poetry spoken in both Arabic and French that are reflected and amplified by the sails themselves. A renowned sound artist, Guillaume has worked with local artist Maryam Faraj Al-Suwaidi to create an immersive tribute to the countries of Qatar and France. Guillaume and Maryam have been friends since their respective artist residencies at Doha Fire Station, and their story of two artists from two different cultures who have been brought together by art adds another dimension to this striking piece. 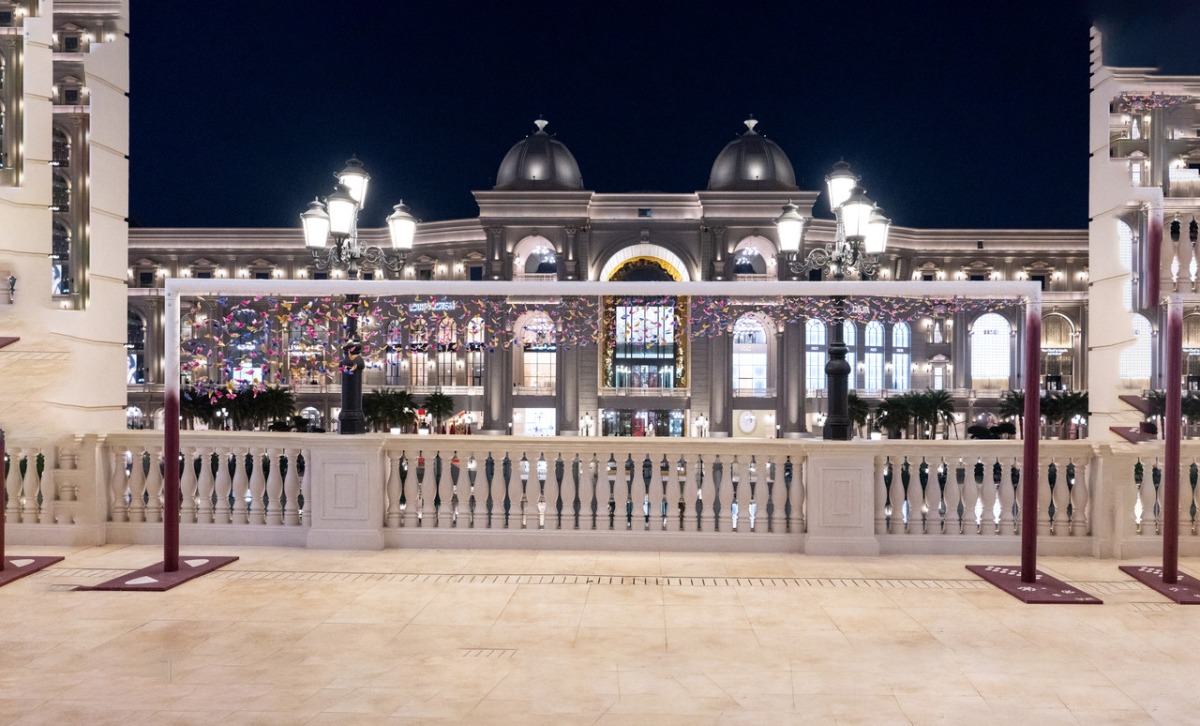 Football’s ability to bring the world together inspired Josefina to consider what the distant nations of Uruguay and Qatar might have in common; what immediately came to mind was that both countries have evolved at the most remarkable pace in recent decades. That’s why her goalpost is decorated with hand-painted butterflies, beautifully finished in Uruguay’s and Qatar’s national colours and the dreamy natural shades you see around the country. These butterflies, delicately fluttering in the goalpost frame, represent how radical transformations can produce surprising magic and beauty. The goalpost’s placement at Place Vendôme is intentional too – this glamorous mall is at the centre of Lusail, Qatar’s brand-new city. 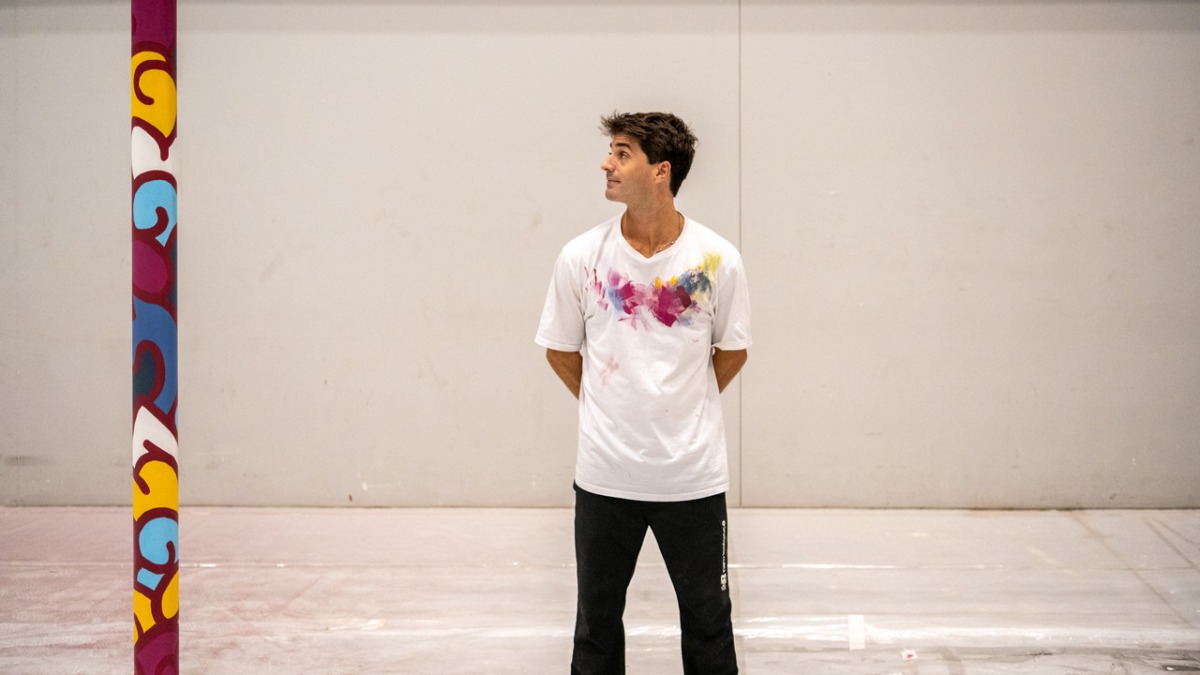 Simo’s playful goalpost comprises creatively blended colours – rich purples, deep mauves and swirls of sky blue – that reference the Argentinian and Qatari flags. There’s another distinct Argentina-Qatar combination on show here too: Simo partnered with local artist Fatima Alsharshani to create the calligraphy that crowns the frame, spelling out Argentina in Arabic. This spirit of creative friendship and intercultural appreciation is mirrored by the goalpost’s placement. It’s located in Aspire Park a place where people of all cultures come together to enjoy leisure time and nature. 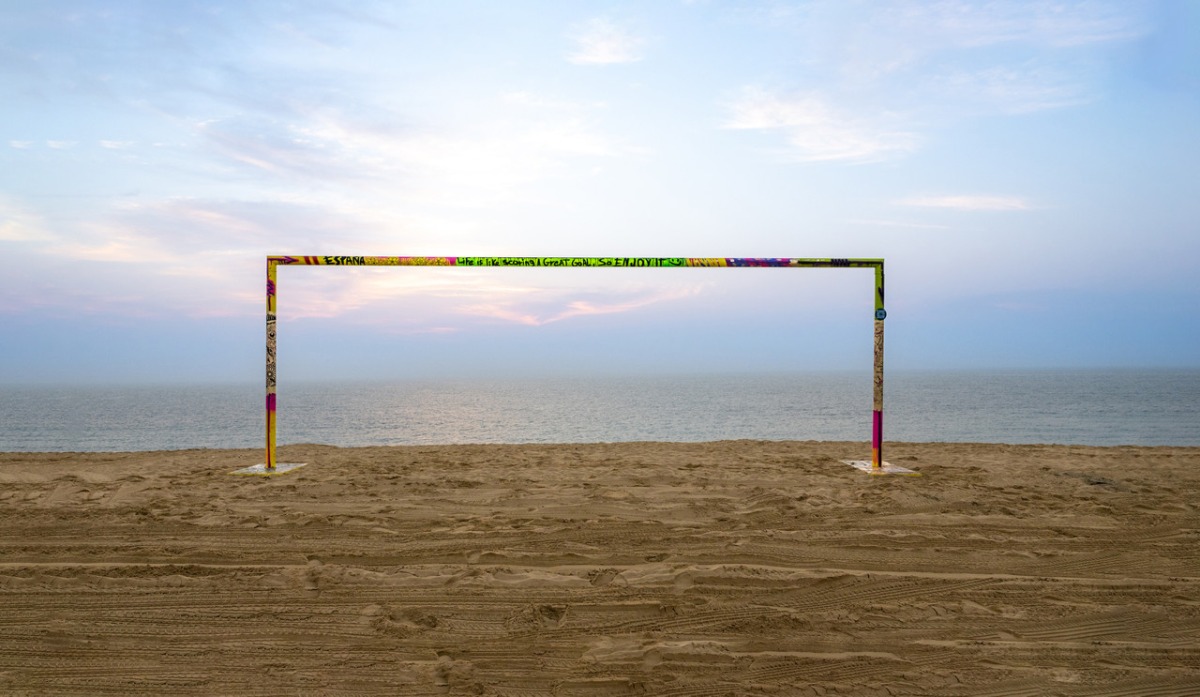 The wide sweeping sand dunes of the Inland Sea create a perfect backdrop for Jordi’s energetic graffiti-style creation. His aim has been to create a big-impact by merging cultures. If you get up close, you’ll discover drawings representing the heritage and history of Spain and Qatar. The gleaming gold leaf that fuses bold colours shows the banner of the artist’s philosophy and a not-so-subtle reference to the iconic trophy. A memorable place to merge the exclusivity of art in such a magical place is enjoying the golden dunes of the Inland Sea. 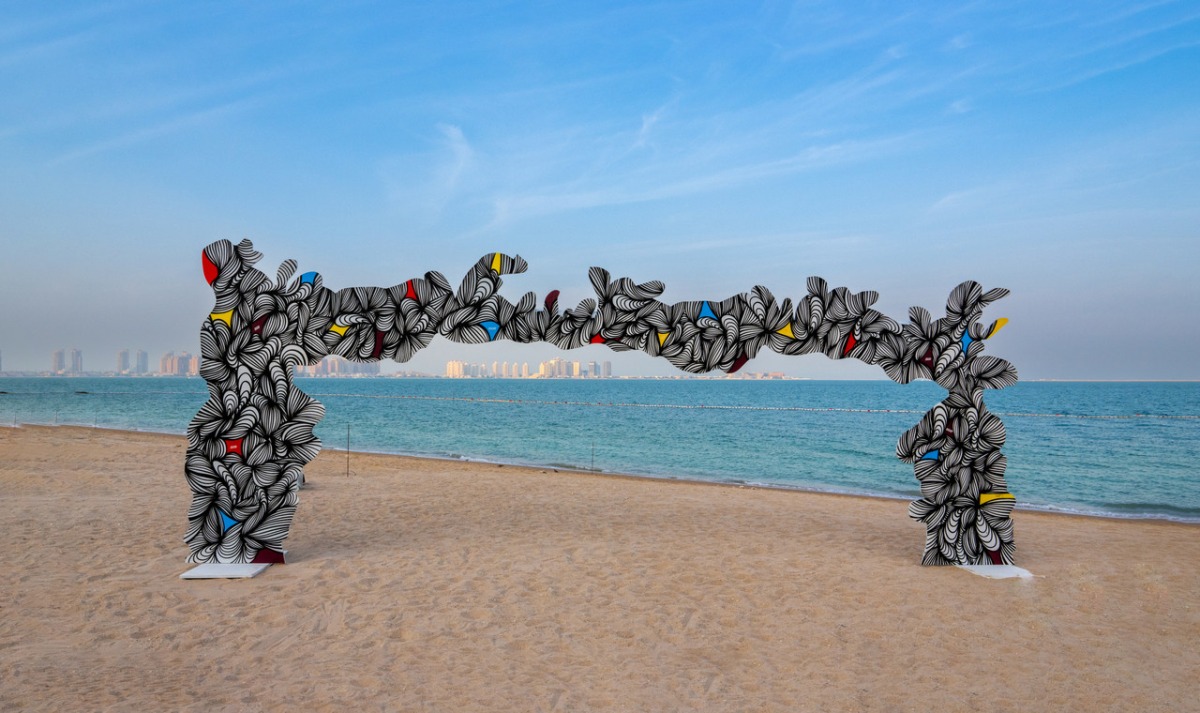 It’s clear to see that KEF!’s goalpost was inspired by the desert rose, found in the sands of Qatar, those swirls and curves you see reference the unmistakable silhouettes. There’s more symbolism at play here, with the circular lines representing the incredible ability of football and art to bring together people of different cultures and nations. Of course, those little pops of colour are significant too, with the dashes of maroon, yellow, red and black all referencing Qatar and Germany’s national colours. 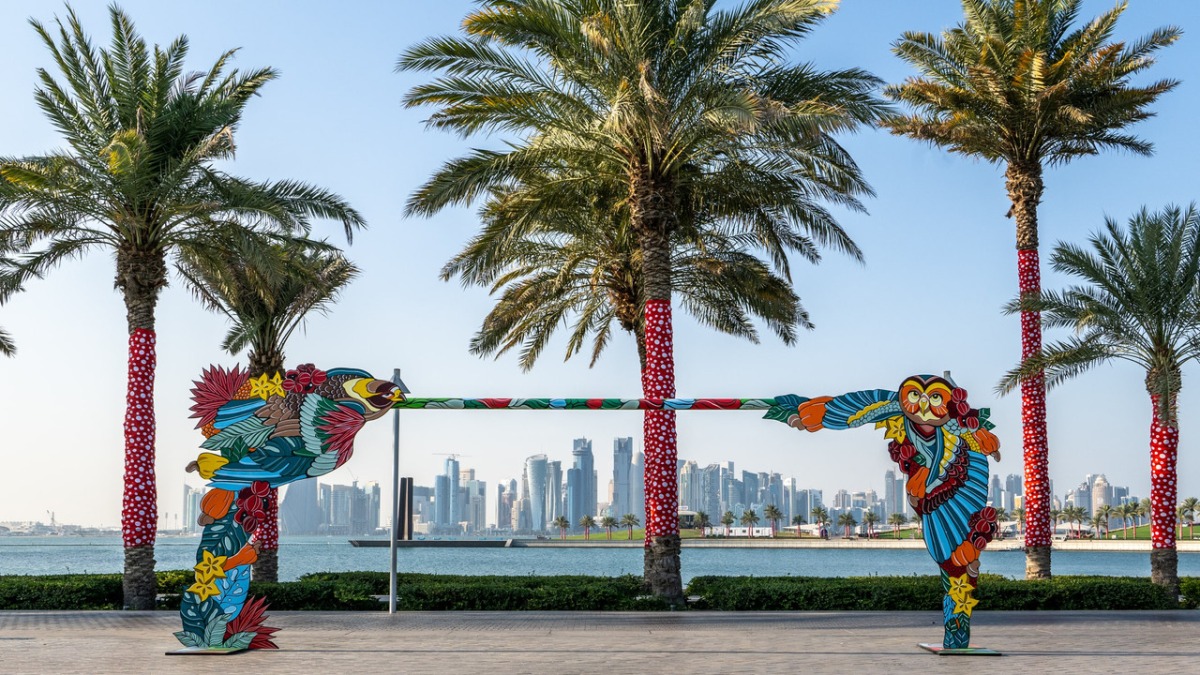 Where The Owl Sleeps by Camila Gondo from Brazil
MIA Park

Camilla’s colourful goalpost pays tribute to Brazil’s lush forests and remarkable wildlife, but with so many animals to choose from it’s no accident she placed an owl in one of its top corners. When football players score in the unreachable top corner of a goal, Brazilians refer to it as scoring “where the owl sleeps”. Of course, the falcon perched on the other side represents Qatar. Her installation’s location in MIA Park allows both majestic birds to seemingly soar against the glittering Doha skyline. 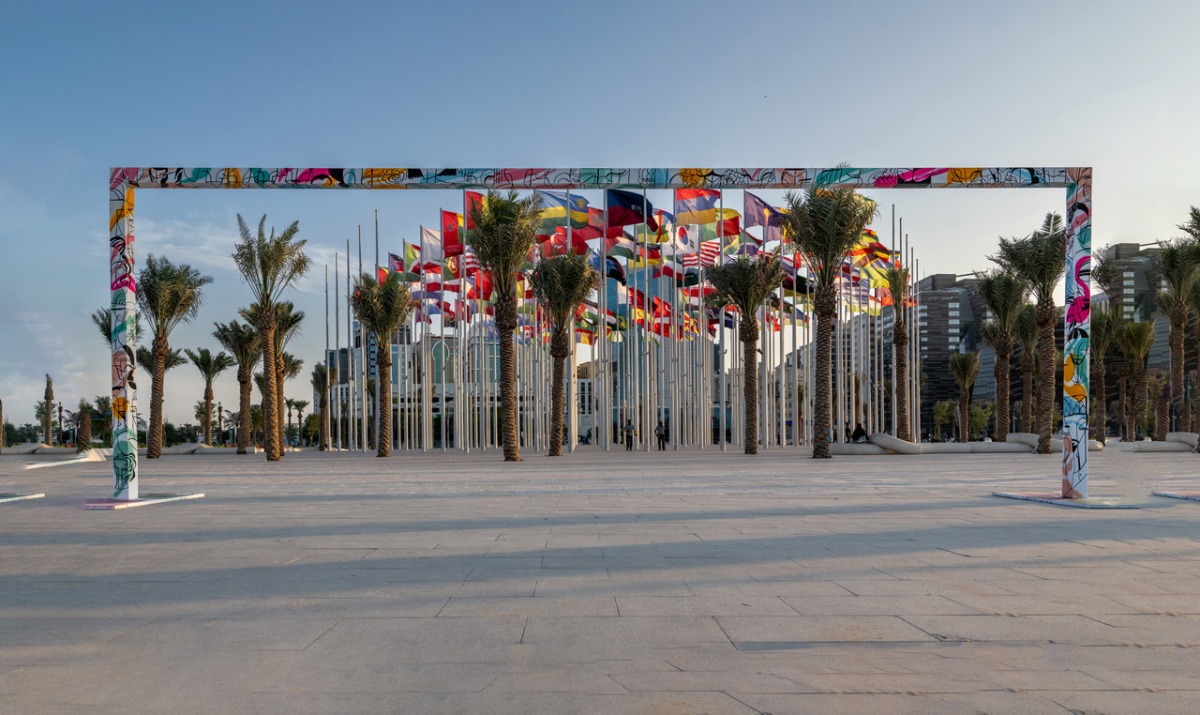 People From The World by Abdulaziz Yousef from Qatar
Flag Plaza

Celebrated Qatari artist Abdulaziz’s artwork is installed at Doha’s Flag Plaza square, where 119 nations’ flags are placed on proud display. He was challenged to represent all the fans that will be visiting Qatar in just one goalpost. The task was delivered brilliantly, with lots of clever touches on show alongside Abdulaziz’s signature hand-drawn figures. Truly offering something for every nationality, this playful goalpost has become a firm favourite of many. 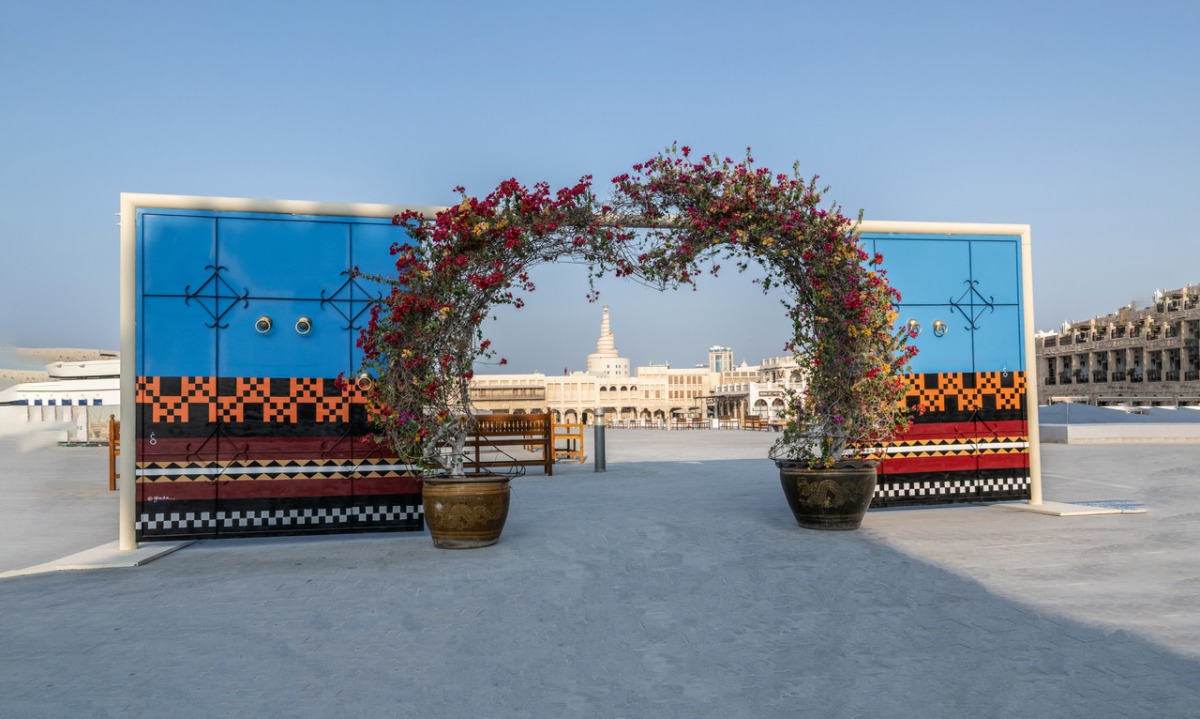 Freej by Ghada Al-Suwaidi from Qatar

With its quaint stalls, grazing camels and aromatic spice market, Doha’s low-rise Souq Waqif remains the traditional heartland of this modern metropolis and makes a fitting location for Ghada’s evocative goalpost. The two sturdy blue doors, surrounded by tumbling bougainvillea, mimic the doorways that frequently feature on older Qatari houses, which children used to use as goalposts during casual neighbourhood football matches. For Qatari adults who have seen their country grow so rapidly in recent years, it’s scarcely believable that from such humble beginnings Qatar has gone on to proudly host people from every corner of the world.