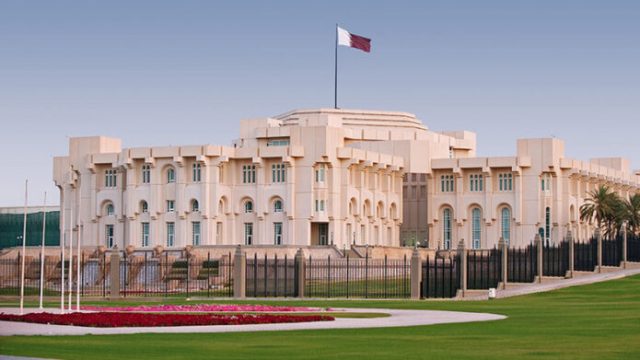 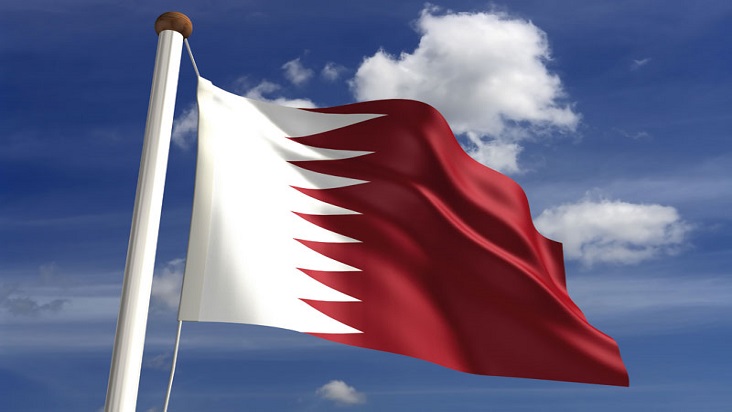 In the past, the Qatari Burda (a cloak-like garment) was red in colour. Ibin Manzor in his book titled, “The tongue of the Arabs”, stated that Qatari Burdas are “red in colour, coarse in texture and emblazoned with flags”.

Some archaeologists believe that the “Bin Ghannam” Island (40 kilometres north of Doha) was the source of the maroon-red dye used in the colouring of textiles and Qatari Burdas.

In April 1932, during Sheikh Mohammed bin Thani was the first to adopt maroon-red as the color of Qatar’s flag in a 1851.

During the reign of Sheikh Abdullah bin Jassim Al Thani, Qatar’s flag had nine points separated by diamond-shaped  rhombus on the white side and the Arabic word “Qatar”  emblazoned in white in the middle.

The flag took its present shape in 1960 during the era of Sheikh Ali bin Abdullah Al Thani, the ruler of Qatar at the time.

During the reign of His Highness The Father Amir Sheikh Hamad bin Khalifa Al Thani (then the Amir of the State of Qatar)  the Law No. (14) of 2012 was issued, which stated that it must be respected and treated with dignity as a symbol of the State, and must not be subjected to disrespect  in any way. The law also set forth in attached Annex specifications in terms of shape, design, colours, size, materials, flag-hoisting protocol, as well as punishment for  contempt and disrespect .

Coat of Arms of the State of Qatar

The Coat of Arms of the State of Qatar depicts a variety of meanings and values of different geographical and cultural connotations. It reflects an interactive and harmonious interface between wild and marine lives. It also depicts the palm tree height and its sense of giving, recalling of  Arab mightiest swords, the sense of dignity and safe haven.

Qatar’s National Day is celebrated every year on 18 December to commemorate the anniversary of the founding of the modern State of Qatar in 1878 by the late Sheikh Jassim bin Mohammed bin Thani. The National day is official holiday.

On 6 December 2011, the Amiri decision No. 80 of 2011 was issued regarding National Sport Day, stating that each Tuesday of the second week of February shall be Qatar National Sport Day, and that it shall be an official holiday, which the state shall celebrate every year.