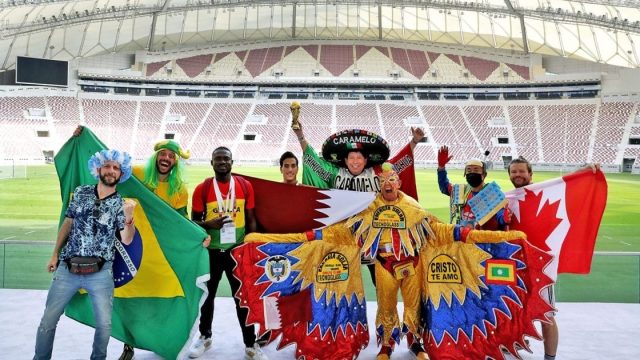 The Supreme Committee for Delivery & Legacy (SC) invited 44 football fanatics from 28 countries to sample the atmosphere at the FIFA Arab Cup™. The guests, who are all members of the SC’s Qatar Fan Leader Network, enjoyed a four-day trip which included attending the inauguration of Al Bayt Stadium, visiting tourist attractions and meeting some legendary football stars.

The delegation included fans based in Qatar, who interacted with international fans to help them learn more about football in the region. The group attended the opening ceremony at Al Bayt, which preceded Qatar’s 1-0 victory over Bahrain in front of a packed crowd. The fans were also given a behind-the-scenes look at tournament preparations, visited Khalifa International Stadium and had a chance to have their photo taken with the FIFA Arab Cup Trophy™.

The objective of the trip, which began on the eve of the tournament and ran until 1 December, was to introduce fans from across the globe to Qatar’s rich culture and offer a glimpse of what to expect at next year’s FIFA World Cup™.

Vincent Okumagba, 57, from Nigeria, said: “It was my first time in Qatar and I must confess I was blown away by what I saw. The airport, roads, restaurants and culture are unbelievable. It’s a lovely country with beautiful people. I will tell people back home that they cannot afford to miss the World Cup in Qatar. People in Nigeria need to start preparing to travel in the hope we qualify. I think Qatar 2022 will be the best World Cup ever.”

Iraq fan Nabaa Al-Dabbagh, 31, said: “The stadium designs tell an amazing story about Qatar. Uniting Arab nations here was the highlight for me, as it is something that hasn’t happened in years. It was very emotional to be here with so many Arab nationals and to celebrate football in Qatar.”

She continued: “I’ve made so many friends during this trip. It was amazing – despite the cultural and language differences, we united through football. Meeting so many football legends was a dream come true, as was stepping foot on a pitch that will host matches during next year’s World Cup.”

Jamir Vallyamannil, an accountant from India, said: “Qatar is ready for the upcoming World Cup. I enjoyed meeting local people and the welcoming hospitality. It is going to be a very accessible World Cup as everything is close together. The infrastructure and facilities are very impressive. Qatar has maintained its traditions and is one of the safest countries in the world.”

Arjun Wara, a university lecturer from the UK, said: “The Arab Cup was full of excitement and it was great to meet fans from across the region. The energy and passion were a pleasure to see and I look forward to more of this during next year’s World Cup.”

As well as visiting tourist hotspots such as Souq Waqif and the National Museum of Qatar, the delegation was also treated to a desert safari, dhow boat ride and an exclusive dinner with a host of Qatar Legacy Ambassadors, including Cafu, Samuel Eto’o, Tim Cahill, Ali Al Habsi, Ibrahim Khalfan and Mohammed Saadon Al Kuwari.

Fatma Al Nuaimi, the SC’s Communications Executive Director, said: “We were delighted to welcome Fan Leaders to Qatar for the FIFA Arab Cup. It was a golden opportunity to introduce our country to fans from across the globe and give them answers on a range of topics, including travel and accommodation, public transport and ticketing, among others. These fans have already started sharing their experience with their networks, as we build up to hosting the FIFA World Cup in 2022.”

The Qatar Fan Leader Network was launched in collaboration with the Qatar Football Association earlier this year with the aim of uniting fans from around the world to discuss the FIFA World Cup™, Qatar as a host country and the visitor experience. The SC is collaborating with supporters to prepare for and respond to fan group requirements, while also creating tailored content in the lead-up to the 22nd edition of the FIFA World Cup™. In addition, members take part in research projects to help shape the fan experience in 2022. There are currently 410 Fan Leaders from 51 countries with the network, representing fanbases from many different regions, cultures and backgrounds.