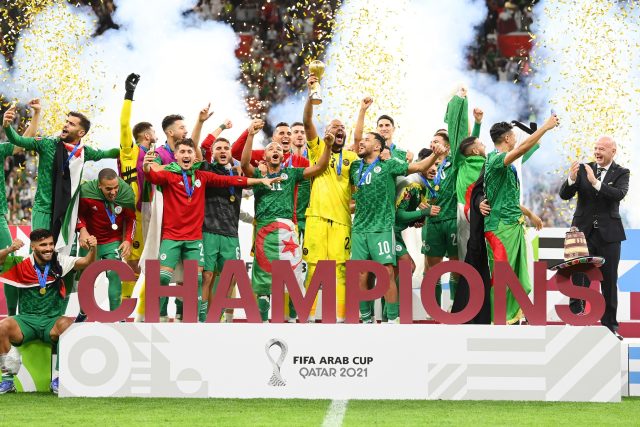 Thousands of fans attended the final day of action in the FIFA Arab Cup™ as Algeria were crowned champions at Al Bayt Stadium in Qatar.

The Greens beat Tunisia 2-0 after extra-time in the final to lift the trophy in front of a passionate crowd. The goal scorers were Amir Sayoud and Yacine Brahimi. Algeria received the trophy from His Highness the Amir of Qatar, Sheikh Tamim bin Hamad Al Thani. It was the culmination of an exciting tournament, which saw the 16 best international teams from across the Arab region go head-to-head in six stadiums that will host matches during next year’s FIFA World Cup™. Prior to the final, Qatar claimed victory in the third-place play-off against Egypt at Stadium 974. The host nation won the match 5-4 on penalties following a goalless 90 minutes and extra-time.

The pre-match ceremony at the final featured two special guests singing the respective national anthems: Saber Al Robai for Tunisia and Abdul Kader Jopanais for Algeria. They were joined on the pitch by the Diwan Protocol Amiri Band and FIFA Legends Ali Al Habsi and Marcel Desailly, who accompanied the FIFA Arab Cup Trophy™. The post-match trophy ceremony paid tribute to the winning team and featured a stunning pyro and drone show.

This was the first pan-Arab tournament to be held under the FIFA umbrella and took place exactly a year before Qatar will host the region’s first FIFA World Cup™. The tournament featured 32 matches over 19 days and 83 goals, at an average of 2.59 per game. It also provided Qatar with a vital opportunity to fine-tune preparations for the FIFA World Cup™, which will kick off at Al Bayt on 21 November and conclude with the final at Lusail Stadium on 18 December. Qatar is set to host the most compact version of the tournament in modern history, with all the stadiums in close proximity of central Doha and fans having the chance to attend more than one match a day during the early stages of the competition.

H.E. Hassan Al Thawadi, Secretary General of the Supreme Committee for Delivery & Legacy, said: “Football’s power to unite our region was again illustrated during the FIFA Arab Cup. It was the perfect showcase for next year’s FIFA World Cup, which will introduce a new region and culture to millions around the world. We look forward to welcoming fans from across the globe for next year’s tournament, which will be the biggest event ever to be held in the Middle East and Arab world – and one that is set to leave a positive social, economic and cultural legacy for our country and region.”

More than 500,000 tickets were sold during the FIFA Arab Cup™, which featured the highest sporting attendance in Qatar’s history – 64,439 – when the host nation faced the United Arab Emirates in the quarter-finals at Al Bayt Stadium. Qatar residents purchased the bulk of the tickets during the tournament, followed by international fans from Egypt and Saudi Arabia. The best-attended matches not involving Qatar were Algeria versus Egypt and Tunisia versus Egypt – both of which sold 93% of the available tickets.

More than 165,000 Fan IDs were issued at the start of the tournament as Qatar works on finalising the system ahead of next year’s World Cup. The tournament workforce totalled 1,800 people from 55 countries, while there were more than 5,000 volunteers, including 350 who flew in from abroad. Media and TV accreditations exceeded 1,000, with around three-quarters of the press pack coming from outside Qatar.

Engineer Yasir Al Jamal, Chairman of the SC’s Operations Office and Vice Chairman, Technical Delivery Office, said: “We were incredibly proud to showcase six tournament venues during the FIFA Arab Cup. Thanks to the sterling work of our project teams and valued stakeholders, we have shown yet again that we are ready to host a memorable edition of the FIFA World Cup. The FIFA Arab Cup provided us with a vital opportunity to test a range of operations, including our stadiums and training sites, transport, accommodation, Fan ID, volunteers and others. We will now fully assess all functional areas over the coming weeks as we continue our preparations for 2022.”

Nasser Al Khater, CEO, FIFA World Cup Qatar 2022 LLC, said: “The FIFA Arab Cup provided us with a golden opportunity to put our plans into practice and gear up for next year’s FIFA World Cup. It was yet another chance to work closely with our FIFA colleagues to deliver a high-profile tournament after twice organising the FIFA Club World Cup in recent years. Our achievements are many: state-of-the-art tournament venues, strong ticket allocations – including a record sporting attendance in Qatar – and impressing visiting teams with our facilities, organisation and hospitality. Everything is in place to host an outstanding edition of the FIFA World Cup in 2022.”